A Pakistani court on Thursday issued a non-bailable arrest warrant for Pakistan Peoples Party prime ministerial candidate Makhdoom Shahabuddin in connection with alleged irregularities in the import of a large amount of the controlled drug Ephedrine during his tenure as health minister.

The judge directed officials to arrest and present them in his court within a week.

During the hearing, ANF officials submitted a report that said they had evidence proving the alleged involvement of Shahabuddin and Ali Musa Gilani in the scam.

The arrest warrants were issued at about the same time that Shahabuddin was filing his nomination papers for the election of the new premier by the National Assembly or lower house of parliament.

Emerging from parliament, Shahabuddin thanked the ruling PPP and its leaders and workers for backing his candidature but averted questions from the media about the arrest warrant.

Asked by a reporter if he would accept the arrest warrant, Shahabuddin only responded by quoting an Urdu couplet: "Yeh to chalti hai tujhe ooncha udane ke liye."

The Supreme Court is examining allegations about out-of-turn quotas for importing Ephedrine that were granted to two pharmaceutical companies by the health ministry, allegedly under the influence of Ali Musa Gilani.

Ali Musa recently cut short his honeymoon in South Africa and returned to Pakistan after being named as an accused in the case by the ANF.

He has told investigators that he does not know Tauqeer Ali Khan, an accused who introduced himself to ANF officials as his personal secretary.

He has also denied allegations that he influenced officials of the health ministry to allocate Ephedrine quotas of 9,000 kg to two pharmaceutical companies.

Gilani, who was disqualified as premier by the supreme court on Tuesday, has said his son was framed in a baseless case.

Gilani also accused army officials working in the ANF of exceeding their powers in investigating the matter.

However, on June 7, Supreme Court Chief Justice Iftikhar Chaudhry had questioned ANF officials why they had not yet arrested Shahabuddin, who was the health minister when the quotas for Ephedrine were issued. 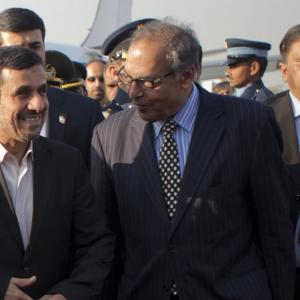