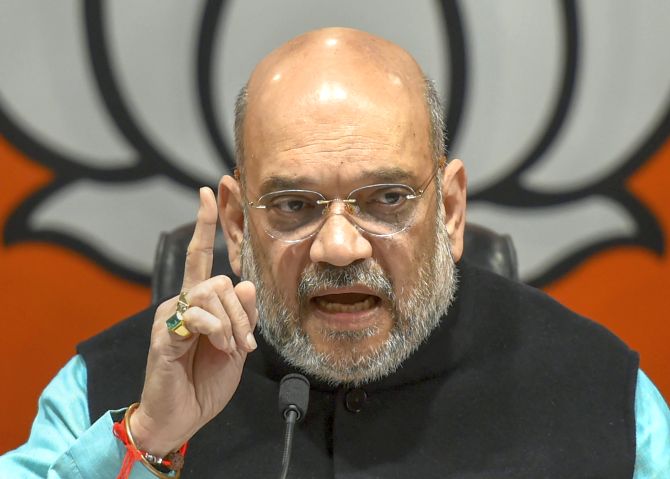 The Calcutta high court on Friday came down heavily on the West Bengal government for not responding to letters of the Bharatiya Janata Party seeking permission for its rath yatras in the state and directed top officials to take a decision on the processions by December 14.

A division bench of justices Biswanath Somadder and A Mukherjee said the government's silence on the permission is 'astonishing and astounding'.

The court disposed of an appeal by the BJP against a single bench order of Thursday that refused permission for its rath yatra and directed the state to hold the meeting by Wednesday.

The court also directed that superintendents of police of all districts in West Bengal will file a report by December 21 to it on holding of 'rath yatra' rallies by the BJP, after hearing all the district chiefs of the party.

Observing that an injunction upon the petitioner could not have been passed by the single bench, the division bench modified its ad interim order of Thursday.

The division bench criticised the state government for not responding to the BJP's letters for permission to hold three rath yatras in the state.

The single bench of Justice Tapabrata Chakraborty had on Thursday said it cannot give permission at this stage for the BJP rath yatra in Coochbehar, which was scheduled to be flagged off by party president Amit Shah on Friday, after the state government refused to allow the event on the grounds that it might cause communal tension.

He directed that the rally stands deferred till the next date of hearing on January 9.

The rath yatra in Coochbehar was slated to be the first of the three by BJP before the Lok Sabha polls next year.

The other two were to be held on December 9 from Kakdwip in South 24 Parganas district and on December 14 from Tarapith temple in Birbhum district.

The rath yatras were supposed to cover all the 42 Lok Sabha constituencies of the state.

Passing the order, the division bench observed that keeping the matter pending till January 9 will virtually render the petition infructuous or merely an academic exercise as three-fourth of the proposed scheduled dates for holding of the yatra would be over by that time.

The division bench said there was no plausible reason for the observation by the single bench -- 'Needless to say, the rally stands deferred till next date of hearing' on January 9.

"This observation in the nature of a mandatory injunction upon the petitioner in their own petition was perhaps quite unnecessary," the division bench said.

It said Justice Chakraborty had passed an injunction on the petitioner in their own petition, specially after specifically opining that reliefs sought for could not be granted at this stage.

The BJP had prayed for direction to the state authorities to grant cooperation/permission/administrative support to organise the three yatras, the party's lawyer Phiroze Edulji said.

The division bench observed during the hearing that the state cannot be so unreasonable not to allow another party to hold a rally.

Appearing for the BJP, counsel Anindya Mitra submitted that the party had written to the state authorities first on October 29 and several more times thereafter for discussion on modalities of holding the rallies, but did not receive any response from either the home secretary or the DGP.

Mitra submitted that the single bench has also deferred the yatras from Kakdwip in South 24 Parganas district and Tarapith temple in Birbhum district and claimed that this was beyond the scope of the matter before the court.

He claimed that such denial amounts to violation of the party's constitutional rights.

Mitra submitted that there was no expression of opinion from the state that there is a problem in giving permission for the yatras from Kakdwip and Birbhum.

Advocate General Kishore Dutta for the state submitted that Coochbehar has a history of communal clashes and that there are intelligence inputs of possible disturbance to peace if the yatra was allowed to be held.

As such, permission for the rath yatra from Coochbehar was refused by the district superintendent of police, Dutta told the court.

The HC's order on Friday was described as a 'big win for democracy' by BJP president Amit Shah.

'Mamata didi's attempts to deny the BJP its legitimate right to undertake political campaign in the state to expose TMC' misgovernance has been thwarted by court, which has asked Bengal administration to cooperate. Big win for democracy! BJP will soon set out on its Gantantra Bachao Yatra (save democracy yatra),' Shah tweeted after the court's order.

Earlier in the day, Shah had launched a scathing attack on West Bengal Chief Minister Mamata Banerjee, accusing her of 'throttling' democracy in the state by not letting his party undertake its three proposed yatras.

He had asserted that the BJP will certainly undertake these yatras across the state by following the due judicial process.

"Mamata Banerjee's govt has failed on all fronts. West Bengal is among the top states in terms of political violence.

"Due to the politics of appeasement, law and order in the state has completely collapsed. Even the administration in Bengal is complicit in this vote bank politics," he had said.

Training his guns on Banerjee and the Trinamool government, the BJP president said people in the state are ready for change and asserted that the party will win a majority of seats in the Lok Sabha polls.

His party's expansion in the state and win in over 7,000 seats in panchayat polls has rattled the Trinamool Congress chief. It is giving her 'sleepless nights' and left her 'scared', Shah said.

"She knows these yatras will lay the foundation for change. That is why she is trying to stop them," he said.

According to Shah, the state government often denied permission to his party's programmes. It had kept writing to the home department and the director general of police to seek their nod for the 'yatras' but in vain, Shah alleged.

"The way Mamata Banerjee is using her government to trample upon democratic norms is very undemocratic and is throttling democracy," he said.

In his view, his party's campaign in the state against the 'misgovernance' of the Trinamool has resulted in people rising against it.

Announcing that he would visit the state on Saturday, he said he would give the chief minister 'unsolicited' advice -- that the more her government tries to suppress the BJP, the more will anger spread among people.

The BJP's expansion was a reason behind violence in the panchayat elections, allegedly by Trinamool Congress workers, with more than 20 BJP workers being victims of political killing, he said.

Shah cited the murder of three party workers and asked Banerjee what action the police had taken so far.

Such massive violence was not seen even during the Left government, he alleged, adding that the police and Trinamool Congress combined to abet political murders.

The BJP president cited a study to claim that the state accounts for 26 political murders out of 100 in the country.

The mafia, he alleged, was working in sectors like health, education and business, and governance has collapsed.

Not just the government, the state administration has also resorted to the "politics of appeasement" to please a community, Shah said, in an apparent reference to the Muslim community.

The state government had neither the capability nor the intention to act against outfits linked to terror, he added.

Shah also rejected the state government's claim that his party's events will lead to communal tension, saying he visited the state 23 times as BJP president and there had never been any communal flare-up.

The TMC and the state police are often behind communal incidents, he alleged.

Asked to comment on the recent violence in Bulandshahr, Uttar Pradesh, Shah noted that Chief Minister Yogi Adityanath has already spoken about it and a SIT has been set up to probe the

The police and BJP workers fought a pitched battle in a forested area of Jalpaguri district on Friday injuring 12 policemen, including an additional SP.

The additional superintendent of police was seriously injured after a stone hit him in the eye, Jalpaiguri SP Amitabha Maiti said.

The incident occurred near Dhupjhora under Dhupguri police station when the BJP activists were going to a public meeting of senior party leaders in neighbouring Coochbehar district.

A bus carrying BJP workers was stopped by the police near Dhupjhora, a village in a forested area, and the activists got down from the bus and started hurling stones towards the policemen, Maiti said.

The policemen were outnumbered by the BJP workers and 12 police personnel, including additional SP Thendup Sherpa, were injured by the stone pelting, he said.

Sherpa suffered serious injury in the eye and was hospitalised, said the SP who has visited the spot.

A large contingent of Rapid Action Force (RAF) and police were deployed in the area.

Several cars and buses were also damaged in the incident.