Sahib Ali, hailing from Assam’s Chirang district, is one of the five men who narrowly escaped the flooding coal mine a fortnight ago. D Banjop Mukhim/PTI reports 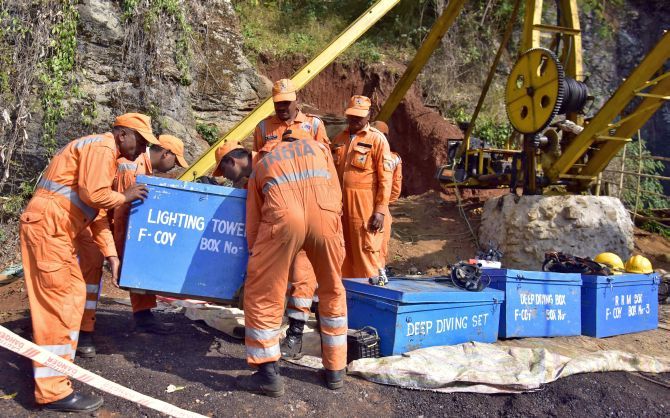 IMAGE: NDRF personnel and other rescuers try their hardest to get the 15 miners out of the 'rat hole' mine. Photograph: Anuwar Hazarika/Reuters

As the operation to rescue 15 trapped miners continue at the 370-foot-deep illegal coal mine in East Jaintia Hills district, a survivor of the December 13 accident said on Saturday there is no way the trapped miners will come out alive.

Sahib Ali, hailing from Assam’s Chirang district, is one of the five men who narrowly escaped the flooding coal mine a fortnight ago.

He said four others who made it alive had fled to their homes in West Garo Hills district of Meghalaya.

“There were 22 of us who went in that day. I had worked for two weeks. Many are diggers who went to the farthest part of the mine. Some are cart pullers like me and we all work in synchronised manner in small holes that barely fit a big man,” Ali said on Saturday.

He said four of those who escaped were the men who were tasked with loading coal into the metal box.

Recounting the December 13 nightmare, Ali said, “All men started work early at about 5 am. By about 7 am, the entire mine was full of water.”

“I was about 5 to 6 feet inside the mine pulling a cart full of coal. For some unknown reasons, I could feel a breeze inside the mine which was unusual. What followed was big sound of water gushing in. I barely made it to the opening of the pit,” Ali said.

“There is no way the trapped men will be alive. How long can a person hold his breath underwater?” he added.

Going by Ali’s story, at least 17 people are still trapped inside the illegal coal pit as only five narrowly escaped the flooding mine out of the 22 men who went in.

“My only hope is to see that their bodies pulled out and last rites be carried out as per traditions,” a sobbing Ali said.

On December 13, he spent the entire day at the flooded mine and slept in a nearby active coal mine in the night, he said.

The ill-fated mine is roughly 370 feet and as of December 29, the rescue officials have calculated that about 170 feet is full of water, an National Disaster Response Force official said.

In Lumthari village where Ali and his fellow miners went to work, coal is found roughly between 200-500 feet underneath the ground. 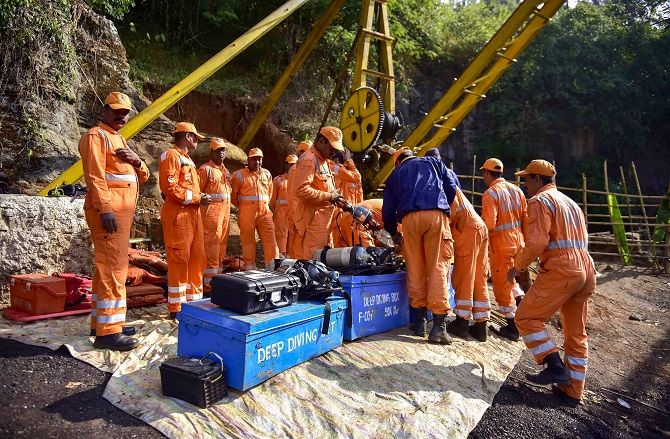 IMAGE: The miners were trapped a fortnight ago when they entered the 'rat hole' mine on December 13. Photograph: PTI Photo

Asked on what prompted him to go and work in the dangerous coal mines of Meghalaya, Ali said the mines promised a big amount of money at the end of the week.

Family members of at least seven trapped miners, hailing from West Garo Hills district of the state, have already given up hope to rescue their kin alive and requested the government to retrieve the bodies for the last rites.

Shohor Ali,who hails from Magurmari village in West Garo Hills district and whose son, brother and son-in-law were among the victims at Lumthari village, said, “We have lost all hope to see them alive. I just wanted the authorities to help retrieve the dead bodies for their last rites.”

The three were allegedly lured to the coal mines at Lumthari as it involves bigger wages and on an average each miner gets paid Rs 2,000 per day, he said.

Kin of four other victims also did not sound optimistic of seeing their dear ones alive.

Shohar Ali was among the first people who came to know of the accident when he received a call within minutes when the mine was flooded.

One of the five persons who narrowly escaped the flooded mine called him up to inform of the accident.

Ali in turn called up his MLA (Rajabala constituency) Azad Aman to find out about the accident and who later called up the Superintendent of Police of the district to verify.

It took the police several hours before finally locating the place where the accident took place, the MLA said.

In all, seven persons from Rajabala in West Garo Hills district, three from Lumthari village itself, and the other five from Assam have been confirmed to have been trapped inside the ill-fated mine.

The state government had announced a Rs 1 lakh interim relief on December 22 to the family members of each of the 15 miners trapped and feared dead, 10 days after the accident took place. 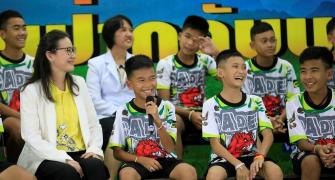