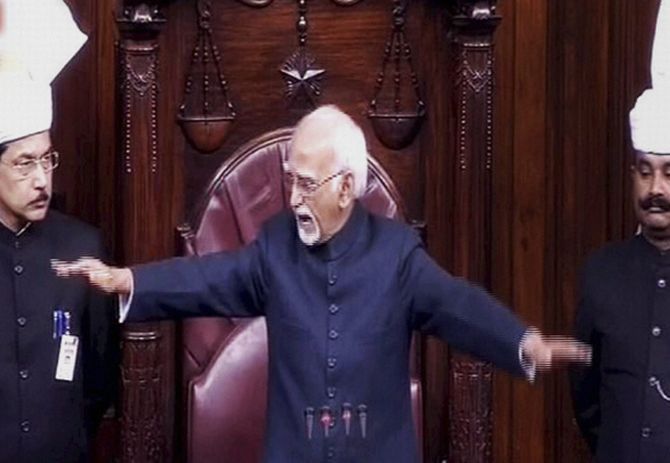 The Opposition on Thursday accused the government of 'shameless conduct' by refusing to mourn the death of over 100 persons due to hardships caused by demonetisation, as opposition and treasury benches clashed in Rajya Sabha forcing its adjournment minuters after it met for the day.

Bharatiya Janata Party members shouted slogans seeking resumption of discussion on the issue as Leader of the Opposition Ghulam Nabi Azad got up to speak. Opposition benches did the same when Leader of the House and Finance Minister Arun Jaitley sought to reply to him.

Chairman Hamid Ansari tried to bring order in the House but with both sides refusing to budge, he adjourned the proceedings till noon.

No sooner were the listed papers laid, Sukhendu Sekhar Roy (Trinamool Congress) said 115 persons have lost their lives in 30 days since Prime Minister Narendra Modi announced junking of old 500 and 1,000 rupee notes. Their death should be mourned in the House, he said. 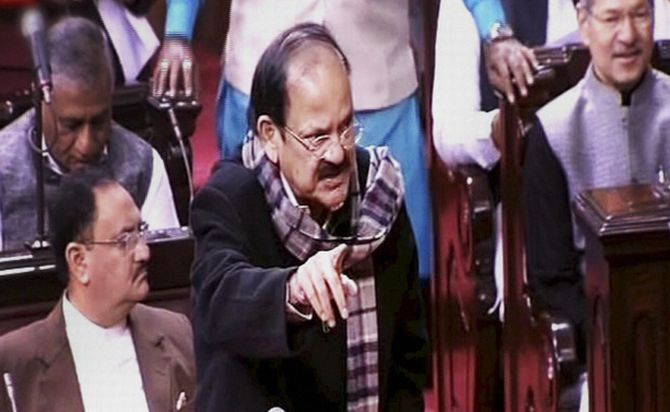 Even before he could finish, Information and Broadcasting Minister M Venkaiah Naidu was up on his feet saying ‘this is politics. Let there be a discussion (on the issue)... November 8 (when the demonetisation was announced) is a historic day’.

He said an unruly opposition has been disrupting proceedings every day.

As Azad indicated his desire to speak, members from the Treasury benches objected.

He also asked ministers not to get agitated, as he allowed Azad to speak.

Naidu said he had greatest respect for the Leaders of the Opposition personally and as an institution but his objection was to opposition members trooping in front of the ministers as soon as their side is heard, practically blocking the government from giving its reaction.

Azad said more than 100 farmers, women, youth and elderly persons have lost their lives in last one month due to hardships caused from wrong policies of the government.

"We wanted this House to mourn their death but the government has refused an obituary reference," he said, adding that the Opposition was left with no option and 150 MPs from Lok Sabha and Rajya Sabha belonging to 16 opposition parties observed 'Black Day' in front of the Gandhi statue in the Parliament House complex. 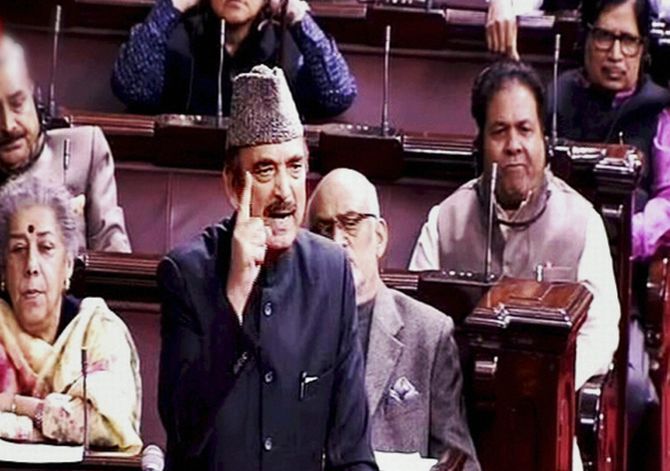 Amid slogan shouting, Azad said it was 'shameful' act of the government that instead of mourning the death it is adding salt to the injury.

People do not have money and the government says there is enough currency in circulation, the senior Congress leader said, adding 'this is the limit of shamelessness'.

At this point, Jaitley got up to reply but opposition members began raising slogans. They were countered by slogan shouting from the BJP benches.

"Nobody is being heard," Ansari remarked as he asked members to resume their places.

With none heeding to his pleas, he adjourned the proceedings till noon.

No sooner did the House reassemble at noon, opposition Congress started raising slogans like 'Sarkar sari mast hai, Ram naam satya hai’ as the chairman called for start of the question hour.

Members of other opposition parties too were seen raising slogans and so were those from the treasury benches.

Repeated efforts by Ansari to restore order in the Upper House did not yield result and he adjourned the House till 2 pm. 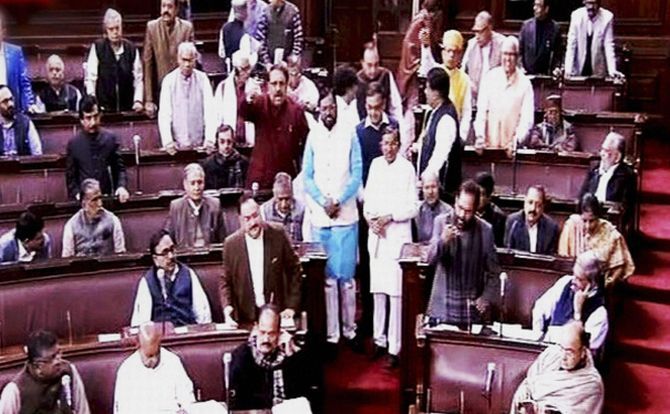 Soon after the House reassembled at noon, Congress members started raising slogans and repeated efforts by Chairman Hamid Ansari to restore order in the Upper House did not yield result and he adjourned the House till 2 pm.

When the House met again at 2 PM, Congress and Janata Dal-United raised strong objections to reduction of import duty on wheat from 10 per cent to nil, terming the step as anti-farmer and a conspiracy.

They also attacked the PM, saying decisions were being made outside Parliament when it is in session.

Ansari then asked members to continue the debate on demonetisation to which the opposition responded with a resounding no. They then started shouting slogans and the House was adjourned for the day.

Proceedings in the Lok Sabha were disrupted for the 15th consecutive day on Thursday as the Opposition continued to engage in sloganeering demanding a debate on demonetisation under a rule that entails voting.

As soon as the House assembled, leader of Congress in the House Mallikarjun Kharge wanted to raise some issue but Speaker Sumitra Mahajan did not allow him and started the question hour.

This prompted members belonging to the Congress, the Trinamool Congress and the Left parties to rush into the Well demanding discussion on demonetisation of Rs 1,000 and Rs 500 notes under Rule 184 which entails division.

As Mahajan refused to concede to the demand, the Opposition members raised slogans to press for it. Apart from usual English and Hindi slogans, the members also raised slogans in regional languages like Malayalam and Bengali.

As the din continued, an upset speaker warned the protesting MPs not to disturb the entire House through their protests. 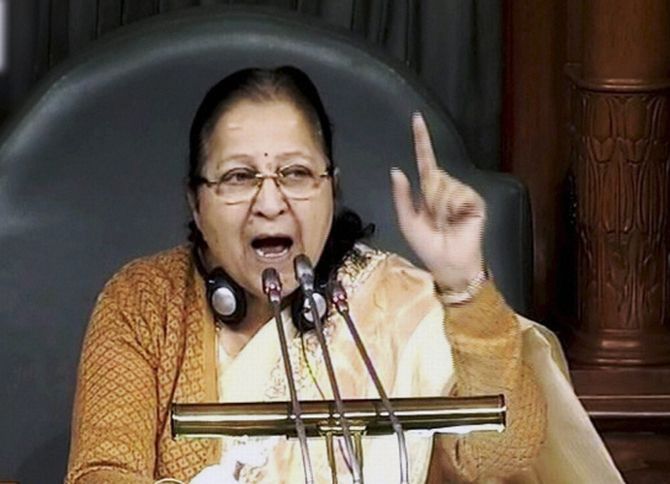 "What is this? I am warning you. Please, please, I am repeatedly telling you if you want to debate, debate. But don't disturb the whole House," she said.

Members belonging to the Samajwadi Party and the Nationalist Congress Party extended their support to their opposition counterparts by standing in the aisles along their seats.

Amidst continued din, the Speaker took up five questions before adjourning the House for nearly 20 minutes till noon and later till 2 pm.

Congress and Left members were seen wearing black bands on their right arm as a mark of protest against demonetisation, which was announced exactly a month ago.

Congress leader Sonia Gandhi, who was recently hospitalised, was present in the House. She was seen engaged in intimate discussions with her son and Congress vice president Rahul Gandhi and party leaders Mallikarjun Kharge, Jyotirditya Scindia and Deepender Singh Hooda.

When the House resumed at 2 pm a short discussion on second batch of Supplementary Demand for Grants, which was subsequently passed by the House amid din, was held.

During the short debate which was conducted amidst din created by members of Congress, Trinamool and some other opposition parties, several members including Kirit Somaya (Bharatiya Janata Party), Jayadev Galla (Telugu Desam Party) and Dushyant Chautala (Indian National Lok Dal) spoke on Supplimentary Demand for Grants.

After the Supplementary Demands for Grant was approved by the Lok Sabha, Parliamentary Affairs Minister Ananth Kumar appealed to the Opposition to shun its protest and agree to a debate on demonetisation under Rule 193 which does not entail voting.

He accused the Opposition of running away from the debate by continuing the protest.

The Opposition members, meanwhile, continued to shout slogans against the government and the PM demanding debate under Rule 184 which entails voting.

Speaker Sumitra Mahajan then adjourned the House for the day. 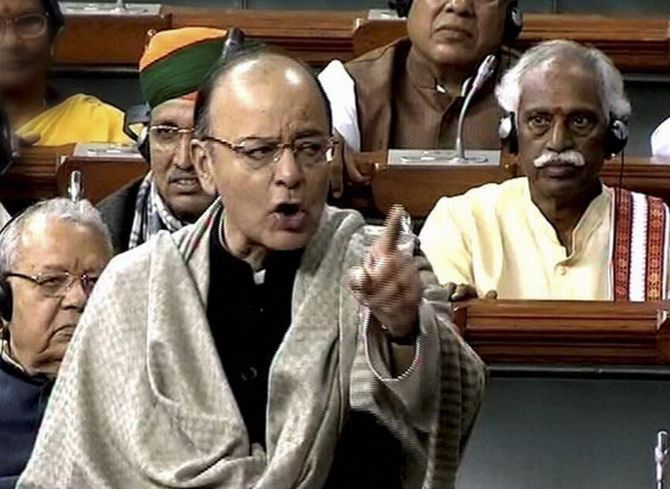 Under Opposition attack, the government on Thursday sought to turn tables in the Lok Sabha by daring Congress to spell out a single decision it had taken against black money when it was in power for 10 years.

“I today challenge them (Congress) to spell out a single step that they had taken during 10-year of their rule against black money,” Finance Minister Arun Jaitley said while replying to a short discussion on second batch of Supplementary Demand for Grants which was subsequently passed by the House amid din.

Refuting the allegation that the government has given additional route to people to convert black money into white by paying 50 per cent tax, Jaitley said the effective liability on them would be about 65 per cent, much higher than 8 per cent under the Voluntary Disclosure of Income Scheme of 1997.

“It is not just 50 per cent. Out of remaining 50 per cent, 25 per cent would be kept by government for four years. If you calculate interest on that, the effective tax comes out to be 65 per cent,” he said.

As per the amendment to the Income Tax Act which is pending in the Rajya Sabha, the unaccounted income declared by black money holders during the 50-day window ending December 30 would attract tax and penalty of 50 per cent while the remaining 25 per cent of such income would have to be deposited with government for four years.

The Supplementary Demand for Grants and related Bills, which were approved by the lower house, authorise government to increase public expenditure by about Rs 60,000 crore though the additional cash outgo would be only Rs 36,000 crore.

As far as extra expenditure is concerned, Jaitley said, the Mahatma Gandhi National Rural Employment Guarantee Act will get additional Rs 4,000 crore and the total expenditure during the fiscal would go up to Rs 47,000 crore for the scheme.

“Although Congress made promises but they never made so much expenditure on the scheme,” the finance minister said, adding, during the United Progressive Alliance regime the actual expenditure used to be much less than what was mentioned in the Budget.

He further said the plan expenditure during the current fiscal would go up to Rs 5.95 lakh crore from 5.5 lakh crore mentioned in the Budget estimates.

The finance minister said India was considered as one of the five ‘fragile’ economies in the world two-and-a-half years ago.

“Today India has become a bright spot in the global economy. India is set to become the fastest growing large economy of the world in third year in a row,” he added.

As regards demonetisation, he expressed the hope that situation would normalise by the end of this month and every effort is being made to minimise the hardship of the people who had stand in long queue to get valid currency.

“I should clarify that Prime Minister Narendra Modi has said that we will normalise the situation by December 30. We will try and minimise the hardship faced by the people. Every day the RBI (Reserve Bank of India) puts money into the system. Efforts are being made to towards less cash economy and digital economy,” he said.