With the verdict on Ayodhya title suit expected shortly, leaders of RSS and VHP on Thursday discussed the strategy in the aftermath of the judgment if it goes against the construction of Ram temple at the disputed site.

"There will be no knee-jerk reaction if the decision goes against us. We will decide on the future course of action, while respecting the court judgment," a senior RSS leader said after the deliberations.

"We have to ensure that the public sentiments do not go against Hindu organisations," he said adding that there will be no hardline approach on the issue.

The BJP's incharge of organisation Ram Lal also joined the deliberations in the evening. He is RSS's representative in the BJP.

Before pronouncing its verdict on the 60-year-old Ayodhya title suit on September 24, the Special Bench has called the lawyers of the parties to the dispute tomorrow to find ways for resolving the case through reconciliation.

The RSS and VHP leaders are understood to have also discussed the possible scenario emerging out of the latest effort by the Allahabad High Court to find an amicable solution.The Bench is slated to pronounce its judgment on September 24.

The RSS and VHP decided to press for an amicable solution to the problem and ask the government to bring a legislation through Parliament for the construction of the temple.

Bhagwat has already made it clear that RSS' response to the verdict will be "within the limits of law, Constitution and democratic way."

"Hamare taraf se koi jhanjhat nahi hoga (there will be no trouble from our side)," Bhagwat had said here on Tuesday.
Speaking to reporters at Sangh's Delhi headquarters Keshav Kunj, RSS leader Ram Madhav today said the organization was hopeful that the court verdict would be "in favour of building the temple."

He also said that the best way to solve the issue would be through a legislation by Parliament.

"We call upon the government to explore the possibility of bringing legislation facilitating the construction of temple," Madhav said.

He reiterated the Sangh's stand that it favoured construction of a "grand Ram Temple" at the disputed site.

RSS sources said the two VHP leaders also addressed the regional campaigners (pradeshik pracharak) of the RSS who have converged here for a two-day conclave and asked them to convey the stand to the people. 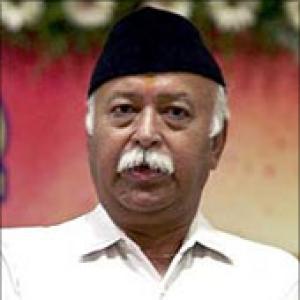 No violence, but Ram temple will be built: RSS

No change in stance on Ram Temple, says BJP