No action against Khurshid on basis of allegations: Govt

Supporting his senior colleague, Minister of State in Prime Minister's Offic V Narayanasamy on Wednesday said no action can be taken against Law Minister Salman Khurshid on the basis of allegations of misuse of funds by an NGO headed by him.

Noting that the Uttar Pradesh government is conducting an inquiry into allegations against the Zakir Hussain Memorial Trust run by Khurshid and his wife, Narayanasamy said action will be taken on the basis of its report.

Louise Khurshid, the CEO of the Trust, has already requested the government of Uttar Pradesh to order an inquiry into the allegations.

"She herself has volunteered (for the probe). The UP government has ordered the inquiry. Now the inquiry is going on. Before the inquiry is concluded, jumping to any conclusion is totally incorrect. That is why we need to wait for the inquiry report. But simply because an allegation has been made, action cannot be taken against the minister (Khurshid). It is totally unwarranted," Narayanasamy said.

Khurshid is under attack from civil society activist-turned-politician Arvind Kejriwal, following a TV sting operation which alleged that the Trust had misappropriated funds meant for providing equipment to the disabled.

"The inquiry is going on. I cannot say," Narayanasamy said when asked to comment further on the allegations.

The minister declined to comment on alleged irregularities in a land deal between Robert Vadra and realty major DLF, saying it is a "personal" matter. 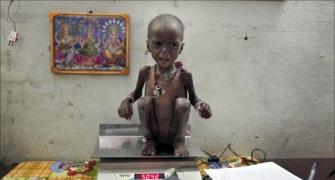 The alarming picture of poverty in India
Louise Khurshid: The SOFT TARGET in the line of fire What is the Digvijaya-Gadkari war leading to?