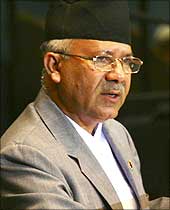 Nepal's embattled Prime Minister Madhav Kumar announced his resignation in a television address to the nation on Wednesday to seek an end to the political impasse, as he succumbed to intense pressure from the opposition Maoists to make way for a "consensus" national government.

"I tender my resignation for the sake of consensus and to pave way for ending the ongoing political stalemate," he said while announcing his resignation.

The Maoists have been demanding his resignation for months and the formation a new national government led by them. The prime minister, who resigned from the post after 13 months in power, said that he still commands majority in the parliament with the support from 22 political parties.

"I believe that the Maoists will now fulfill their commitment to complete the peace process after my resignation," the 57-year-old prime minister said in a televised address to the nation.

He was hinting that the Maoists should return the seized property, dissolve their paramilitary organisation the Young Communist League and agree to manage their combatants as per the three point agreement they inked with the major coalition partners on May 28 while extending the term of the constituent assembly.

The prime minister had also agreed to resign at the earliest under three-point agreement. In his address to the nation the PM has complained that he has not received cooperation from the Maoists which hindered the peace process. He also mentioned about the Maoists' continued blockade of the Parliament, street movement and non-cooperation.

He held mainly the Maoists responsible for failing to draft the constitution on time and completing the peace process.

He also pointed out that the Maoist combatants need to be integrated and rehabilitated within the next three months in order to complete the peace process.

The prime minister also underlined the need for forging cooperation and collaboration among all political parties saying that without this the peace process could not be completed and the task of writing the constitution could not be accomplished.

The prime minister's resignation comes at a time when the Maoists have warned to obstruct the budget session of the Parliament that would begin on July 5.

The government was planning to announce the budget for the new fiscal year by mid-July.

Prior to announcing the resignation the prime minister had held consultation with the top leaders of the ruling alliance at his residence at Baluwatar this afternoon.

He met Nepali Congress vice-president Ramchandra Poudyal, former prime minister Sher Bahadur and other senior leaders. The Maoists had been pressing for the prime minister to resign for months aiming to form a Maoist led government.

The prime minister, however, said that he had tendered the resignation despite having majority support from 22 political parties.

The Nepalese parliament, or constituent assembly, was elected in 2008 with a two-year mandate to complete the peace process launched after the 10-year civil war between Maoist rebels and the government, and to draft a new national constitution.

The CA failed to complete either task on time, hampered by fierce disagreements between the Maoists and their political rivals. Its term had been due to end on May 28, leaving the country without a functioning legislature, but Nepalese lawmakers voted to extend it for another year.