NC to boycott panchayat polls unless Centre protects Article 35A 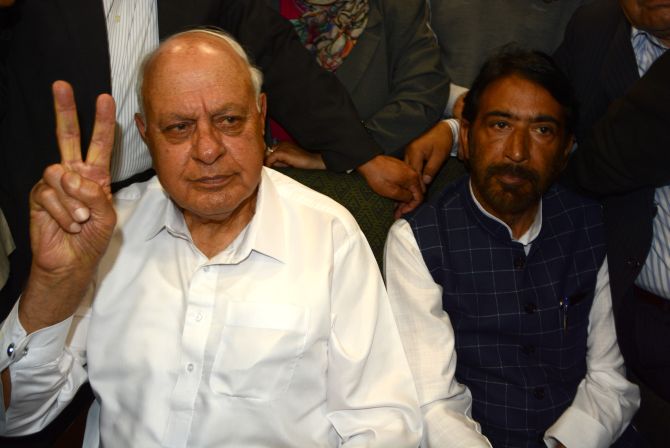 The Jammu and Kashmir National Conference will boycott the local body and panchayat elections in the state unless the Centre takes effective steps for protection of Article 35-A of the Constitution, which is facing legal challenge in the Supreme Court, party president Farooq Abdullah said on Wednesday.

"The core group (of NC) unanimously decided that the National Conference will not participate in these elections unless and until the government of India and the state government clarify their positions in this regard and take effective steps for protection of Article 35-A in and outside the courts," Abdullah said after the meeting in Srinagar.

He said the decision of the state administration to hold urban local body polls and panchayat elections was taken in a 'hurried manner' and without taking into consideration the prevailing situation 'created by the powers that be by unnecessarily fiddling with Article 35-A'.

The state government last week announced the schedule for holding elections to local bodies and panchayats in the state.

While the urban local body polls are slated for the first week of October, the Panchayat elections are scheduled to be held in November-December this year.

Abdullah said the core group had a detailed discussion about prevailing situation in the state with particular reference to Article 35-A of the Constitution.

"It was felt that any tinkering with Article 35-A would prove disastrous not only for our state but for the entire country".

He said the stands of the central government and the present dispensation in Jammu and Kashmir before the Supreme Court goes 'clearly against the wishes and aspirations of the people of the state'.

"They conveniently ignore that this provision was incorporated in the Constitution after thorough discussion between the then state government and the Government of India and was made part of the Delhi Agreement 1952," he said.

"It was also approved by the state's constituent assembly as envisaged under article 370 of the Constitution," he said.

Abdullah said the core group resolved that J&K National Conference would fight tooth and nail all 'sinister' attempts aimed at interfering with this constitutional guarantee.

"Such attempts, if allowed, shall strike at the very basis of the relationship between the state and the Union," he said.

The Peoples Democratic Party on Wednesday said it was hopeful that new Jammu and Kashmir Governor Satya Pal Malik will convene an all-party meeting on holding urban local body and panchayat elections in the state.

'(When I was) in government, I had called an all-party meeting to discuss ULB/Panchayat elections and majority of the parties had opposed holding of elections at that time. We expected that the governor too would have called an All Party meet where everyone would put forward their view point,' PDP president and former chief minister Mehbooba Mufti was quoted as saying on party's official twitter handle.

However, in a second tweet, Mehbooba Mufti said, 'We are still hopeful about that meet and would share our opinion with all the parties so that a consensus is built.'

The party also hit back at National Security Advisor Ajit Doval for terming a separate constitution for Jammu and Kashmir as an ‘aberration’ and said those who believe in accession of the state to the Union of India should also have faith in the instrument of accession.

"Anyone who believes and endorses the accession of Jammu and Kashmir with India should also have faith in the clause 8 of the Instrument of Accession which provides for internal sovereignty of the state," PDP chief spokesperson Rafi Ahmad Mir said in a statement.

Mir said such unwarranted remarks of the NSA when Kashmir valley was witnessing a political turmoil, showed his ‘insensitivity’ towards the people of the state.

'The state's internal sovereignty is a matter of right and has a historical significance, although this sovereignty had been reduced to a hollow shell over these years, it continues to be a matter of our identity, symbolic of our collective struggle against autocratic rule,' Mir said.

The PDP spokesman said it was unfortunate that when a Muslim-dominated state rejected the two-nation theory and went to accede with a Hindu-majority nation with trust, 'we are being harassed, pushed to the wall by these assaults on our state's special status'.

This selective discrimination and assaults on the state's special status will only 'alienate' the people further as the government of India at the time of accession gave an undertaking that the people of Kashmir could frame their own constitution, he said. 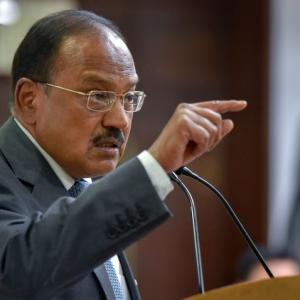 Having a separate constitution for J-K was an aberration: Doval