Navy on standby to evacuate 1,400 tourists from cyclone-hit south Andaman 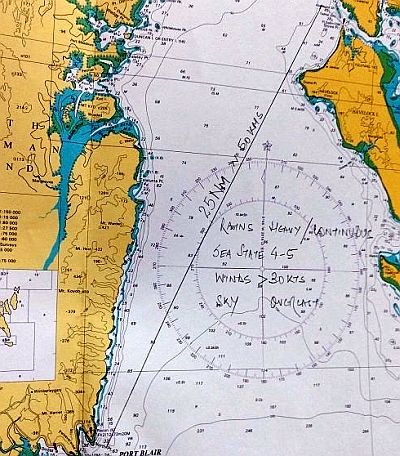 Around 1,400 tourists are stranded on Havelock and Neil islands in south Andaman due to cyclonic weather conditions and the Navy has pressed into service four ships to evacuate them. The islands, some 40km from Port Blair, have been hit the most by the storm, caused by a depression currently centred 300km south-southwest of Port Blair, which is likely to develop into a cyclone in 48 hours and head west towards Andhra.

Home Minister Rajnath Singh on Thursday said all tourists at Havelock Island in the Andamans are safe and efforts are on for their early evacuation.

Singh called up Andaman and Nicobar Islands Lieutenant Governor Jagdish Mukhi and enquired about the status of the stranded tourists.

Mukhi briefed the Home Minister about the situation and the steps taken for rescue of the stranded tourists.

"All the tourists in Havelock Island are safe and the government has made all preparation to evacuate them. Government will launch rescue operations after the intensity of cyclone reduces," Singh said in a statement.

The home minister said that rescue teams are ready at Port Blair and appealed to family members of the stranded tourists not to panic as all in the Havleock Island are
reported to be safe.

Havelock and Neil islands, approximately 40 kms from Port Blair, have been hit the most by the cyclonic weather conditions caused by a severe depression over southeast Bay of Bengal which led to heavy rainfall, strong wind and rough sea conditions, officials said.

Neil and Havelock are two of the most popular tourist attractions in Andamans and the only means of transportation from them are vessels and choppers which have stopped operation since Monday last due to bad weather.

The local populace of 10 villages of Havelock and Neil islands have also been hit severely by the cyclone which has hampered the movement of essential supplies.

Indian naval ships Bitra, Bangaram, Kumbhir and LCU 38 have been deployed for evacuation. However, the ships continue to remain anchored near Havelock Island, due to the high intensity of the cyclone.

In a series of tweets, the defence ministry said: "Ships standing by at PortBlair and Evacuations shall commence as weather improves. Indian Navy Keeping a close watch to provide all help."

"Depression lay 260 kms South West of Port Blair moving North and likely to intensify into a cyclonic storm in next 24 hours," it added.