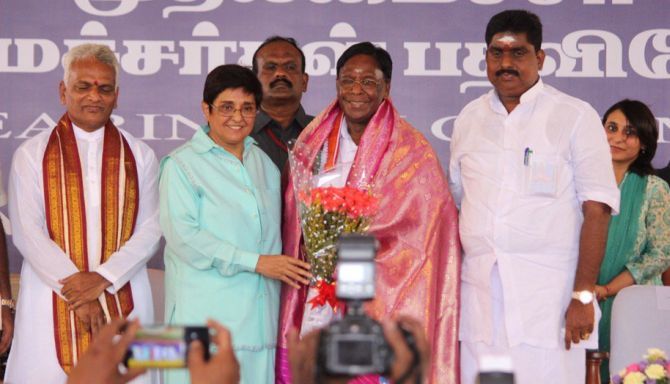 Puducherry Chief Minister V Narayanasamy on Thursday refused to join issues with Lieutenant Governor Kiran Bedi over the use of social media by government officials, saying he would not like to comment on administrative issues.

“I don’t want to comment on administrative matters,” he told reporters despite repeatedly being asked about Bedi’s comments favouring use of social media by government officials.

The chief minister is yet to react to the Puducherry LG’s comment.

Bedi is known to be very active on Twitter, while Narayanasamy too has a handle on the social media site but not too active.

Narayanasamy said he met Union Home Secretary Rajiv Mehrishi on Thursday and requested him to provide three more Indian Administrative Services officers in the rank of joint secretary to the Union Territory for appointment in Puducherry.

At present, there are 11 IAS officers posted in Puducherry.

Differences between the ruling Congress and Bedi came to the fore earlier this month after the government issued an order, directing all officers, heads of departments and employees of government-owned undertakings to immediately desist from using the social media such as Twitter, WhatsApp and Facebook.

Later on January 5, Bedi had cancelled the order of Narayanasamy banning the use of social media for official communication.

Bedi had posted a copy of her order on her personal Twitter handle declaring the government circular ‘null and void’ with immediate effect on the ground that it was issued ‘in contravention of guidelines, rules and policies of the government’.

A day after Bedi cancelled the order, eight of the 15 Congress MLAs in the Union Territory said they have sent a joint memorandum to Union Home Minister Rajnath Singh complaining about her ‘publicity mongering’ and ‘rigidly autocratic style of functioning’.