Nagaland MLAs ready to quit for lasting peace in state 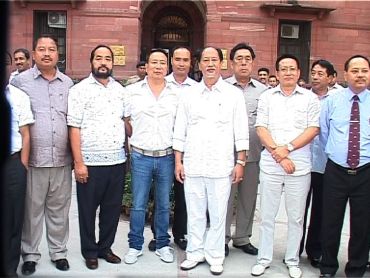 Even as all the sixty legislators from Nagaland met Prime Minister Manmohan Singh and Home Minister Sushil Kumar Shinde on Tuesday and Congress president Sonia Gandhi on Wednesday to mount pressure for an early solution to the seven decades old Naga imbroglio, the Khole-Kitovi faction of the National Socialist Council of Nagaland has expressed strong opposition to any "secret pact" with the NSCN-Isak Muivah faction without taking "NSCN (Khole-Kitovi) into confidence."

The Khole-Kitovi faction has cautioned the government of India that "any such attempt will miserably fail to resolve the long pending Naga political problem."

Meanwhile, the sixty legislators from the state have expressed their readiness to sacrifice their present positions and put in their resignation letter to pave the way for permanent peace in the state. The legislators also urged the Centre to postpone the next assembly elections scheduled for March 2013, and form an all party government taking representatives from the NSCN outfit at least for a minimum period of one year.

Talking to the media, Chief Minister Neiphiu Rio asserted that the Forum for Naga Reconciliation would bring all the NSCN factions on a common platform once the agreement is reached between the government of India and the NSCN-IM.

Rio also added that "the prime minister, home minister and
the Congress president are appreciative of the move as all sixty MLAs have come to express their solidarity for the restoration of peace in the Nagaland. We all are ready to resign anytime for paving the way for a permanent solution to the Naga political problem."

Replying to a question, Rio emphatically said, "Who knows which are the sixty legislators will win in the next assembly elections and what will be their approach to the Naga political problem? So government of India should grab this opportunity and ink the long awaited over six decades old Naga political problem."

The Nagaland chief minister has justified the concern expressed by the NSCN (Khole-Kitovi) faction by pointing out that "they are still in the dark about the ongoing process of peace talks. I am sure the government of India will inform them the terms and conditions of the accord once both the NSCN-IM and the Centre reaches to an agreement. But the package can't be different for three different NSCN factions."

Rio along with some legislators met the former home minister and now Finance Minister P Chidambaram and apprised him of the development.

Kitovi N Zimomi, the general secretary of the Khole-Kitovi faction, in a statement made a fervent appeal to all sections of Naga society to "remain alert to the fast developments and to read the gameplan of the government of India and the NSCN-IM who are making an all out effort to reach an agreement keeping every Naga in the dark."

The Kitovi faction said, "It is not a rocket science or Newton's law but a simple political logic that the question of interim government anywhere in the world arises only after all the contending group's scrutiny the core issues among the  members of non-state actors are mutually ironed out through high level committees, commissions and various apolitical and non-partisan forums."

"The recurrence of violence and bloodshed post solution is more dangerous because everything is at a transitional period. Beginning from the submission of memorandum to Simon
commission in 1929 it is now more than 8 decades old of indo-Naga political imbroglio and its solution demands Naga people's participation with clear conscious vision and unchangeable determination. If the reported solution between GOI and some political group is truly an aspired and cherished Naga sovereignty and independence, even an orphan whose parents were killed in the name of sovereignty and even those who are being incapacitated or crippled by freedom fighters will nod in agreement for may live in peace," the Kitovi faction noted.

The Kitovi group pointed out that "the government Of India is reminded that a solution with a single political group without the consent of majority Nagas will drives the Nagas further away widen and deepen the gap of chasm because unapproved political solution's documents in the past had humiliated Naga history never were out rightly rejected by the Nagas. The solution to the Indo-Nagas political problem without the consent of the Nagas has no political legitimacy."

The Khole-Kitovi faction also cautioned the sixty-member legislators, "It would be wise and sensible on the part of Naga legislators to tell and enlighten the Naga people clearly and truthfully if the noble promise and assurance to step down from power is based on the principle of Naga concordant signed by top leaders of three Naga political groups in Aug. 26, 2011, organised by the FNR. It is a  tremendous and remarkable decision announcement on the part of Naga legislators in the state of Nagaland to step down in the event of a political solution with theGOI, kindly clarify whether it is solution with one political group only or solution with all the groups' top Naga leaders' the signatories of concordant?"

Significantly, the Khole-Kitovi faction had sent a senior Kilonser (minister of the underground government) Alezo as a special emissary to New Delhi last month with a confidential letter addressing to P Chidambaram expressing its willingness to join peace talks with the government of India without any preconditions.

Intelligence sources said that Alezo has already submitted this communiqué to the "proper channel" at least two weeks ago and eventually it reached to the Ministry of Home Affairs for necessary action. But there was apparently no response from the Centre which was why the Khole-Kitovi faction has issued a strong communiqué urging the Naga people to remain alert on the fast development on Naga political problem.

Image: Nagaland CM Rio with other lawmakers after meeting PM on Tuesday in New Delhi 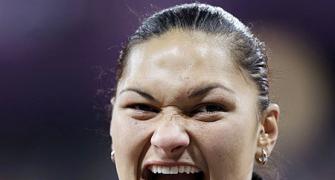 Efforts on for solution to decades-old Naga issue: PC

'No supra-state offer for Nagas by Centre'