Source: PTI
April 28, 2010 20:35 IST
A trade union leader, arrested in the capital during investigations into Maoist network, was the Delhi chief of proscribed Communist Party of India-Maoist who was looking after party operations in the city, police sources said on Wednesday.

Gopal Mishra, leader of little-known trade union 'Mehnathkush Mazdoor Morcha', was placed under arrest on Monday while his wife Anjali was arrested by Delhi Police's Special Cell on Tuesday, the sources said.

An NGO Committee for the Release of Political Prisoners claimed two more persons -- a trade unionist Pradeep and an unknown man -- were "illegally" detained early this week.

There was no word about these two persons. An investigator said Mishra was the Delhi chief of the Maoists looking after its day-to-day operations besides planning activities.

No official was ready to come on record about the progress of investigations into the case. Mishra used to conduct meetings of leaders of the party near his Ramnagar house in east Delhi, the sources said, adding they were verifying the names of those who attended such meetings.

"He is the main man for the party in Delhi. He controls the operations in the capital," a senior police official said. Sources said he was the commander of the sub zonal committee for the national capital.

Investigators are conducting searches in several places of the capital. Asked about the arrest of Mishra's wife Anjali, sources said she used to attend party meetings and record minutes.

Documents were also seized from their rented accomodation, they said. The couple were produced before Chief Metropolitan Magistrate Kaveri Baweja on separate days and were sent to police custody till May 2.

They were charged under Unlawful Activities (Prevention) Act. Sources said the couple was 'one of the fronts' for the ultra Left to set up a base in the city.

Mishra, a graduate, was an active member of CPI-Maoist and was tasked with organising unorganised labourers under a trade union, sources said, adding he has been working in Delhi for the past 18 months.

Besides his trade union work, he used to work for NGO projects also. He had also met Kobad Ghandy before the latter's arrest in Delhi and was in close touch with him.

Ghandy was looking after the sub-committee which was trying to increase Maoist influence in urban areas. The CRPP had on Tuesday alleged that Mishra was taken into custody on April 25 from his residence in Ramnagar and his wife was picked up a day later, but their arrests were shown after the stipulated time. Police denied the claims.

The CRPP claimed that Mishra was taken into custody on  April 25 from his residence in Ramnagar in east Delhi and his wife was picked up on Tuesday. It quoted Ritesh Kumar, the owner of the house in which Mishra was staying as a tenant, as saying that police reached the residence along with Mishra at 11 am on Monday and waited till evening for his wife Anu to return.

"The house owner was later told by the police that they were taking him to the police station. Later, it became clear that along with Mishra another trade unionist Pradeep was also taken away by the police," a CRPF officer said.

After Ghandy, this is the third arrest of a Maoist leader in the capital in the past six months. Ghandy was arrested in September last year while Krishna Rao, another suspected Maoist, was apprehended last month.

He was released after questioning. Police sources had earlier said during investigations into the Maoist network in the capital it came to light that the extremists were infiltrating into trade unions in the city.

They had an active trade union in Okhla Industrial area. The Maoists were also targeting displaced labourers and bringing them under their fold, they said. 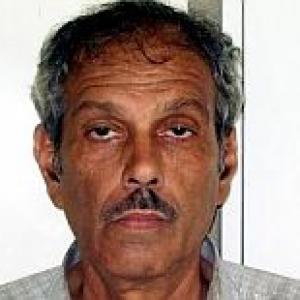