The nearly two-year investigation by special counsel Robert Mueller found 'no evidence' of a 'collusion' between the Trump campaign and the Russian government during the 2016 United States elections, Attorney General William Barr announced on Thursday, in a major relief to President Donald Trump.

Addressing the media at the Department of Justice here on the release of Mueller's redacted report on the investigation into Russian interference in the 2016 presidential election.

Mueller was chosen to head the investigation in 2017 following concerns from US intelligence agencies that Russia had tried to tip the election in Trump's favour.

The businessman-turned-politician defeated former secretary of state Hillary Clinton in the 2016 presidential election.

Barr said Mueller investigated a number of links or contacts between Trump Campaign officials and individuals connected with the Russian government.

"After reviewing those contacts, the special counsel did not find any conspiracy to violate US law involving Russia-linked persons and any persons associated with the Trump campaign," Barr said on the 400-page report.

He, however, said the Russian government sought to interfere in US election process.

Barr emphasised that the primary purposes of the Special Counsel's investigation was to determine whether members of the presidential campaign of Trump, or any individuals associated with that campaign, conspired or coordinated with the Russian government to interfere in the 2016 election.

The Special Counsel's report states that his 'investigation did not establish that members of the Trump Campaign conspired or coordinated with the Russian government in its election interference activities'.

"But thanks to the Special Counsel's thorough investigation, we now know that the Russian operatives who perpetrated these schemes did not have the cooperation of President Trump or the Trump campaign -- or the knowing assistance of any other Americans for that matter," he said.

"That is something that all Americans can and should be grateful to have confirmed," Barr said.

He said the report details efforts by Russian military officials associated with the GRU to hack into computers and steal documents and e-mails from individuals affiliated with the Democratic Party and the presidential campaign of Hillary Clinton for the purpose of eventually publicising those e-mails.

Again, the Special Counsel's report did not find any evidence that members of the Trump campaign or anyone associated with the campaign conspired or coordinated with the Russian government in its hacking operations, Barr said.

"In other words, there was no evidence of Trump campaign 'collusion' with the Russian government's hacking," the Attorney General said.

"So that is the bottom line. After nearly two years of investigation, thousands of subpoenas, and hundreds of warrants and witness interviews, the Special Counsel confirmed that the Russian government sponsored efforts to illegally interfere with the 2016 presidential election but did not find that the Trump campaign or other Americans colluded in those schemes," he said.

He also said President Trump did not commit an obstruction-of-justice offence.

Barr said there were 10 episodes involving Trump that were scrutinised for possible obstruction of justice.

"As I said several times, the report contains limited redactions relating to four categories of information. To ensure as much transparency as possible, these redactions have been clearly labelled and color-coded so that readers can tell which redactions correspond to which categories," Barr said.

Most of the redactions were compelled by the need to prevent harm to ongoing matters and to comply with court orders prohibiting the public disclosure of information bearing upon ongoing investigations and criminal cases, he said.

These redactions were applied by Department of Justice attorneys working closely together with attorneys from the Special Counsel's Office, as well as with the intelligence community, and prosecutors who are handling ongoing cases. The redactions are their work product.

The President's personal lawyers were not permitted to make, and did not request, any redactions, Barr said.

Earlier on Thursday, President Trump said the Mueller probe was 'Greatest Political Hoax of all time!'

'Crimes were committed by Crooked, Dirty Cops and DNC/The Democrats,' tweeted Trump, who refers his election rival and former secretary of state Clinton as 'Crooked'.

Meanwhile, Democratic Congressman Jerry Nadler said he has sent a letter to Mueller -- requiring his testimony before the House of Representatives Judiciary Committee by May 23.

"We cannot take Attorney General Barr's word for it. We must read the full Mueller report, and the underlying evidence. This is about transparency and ensuring accountability," Nadler said.

Democrats in Congress have demanded a full unredacted report, and want Mueller to testify to Congress. 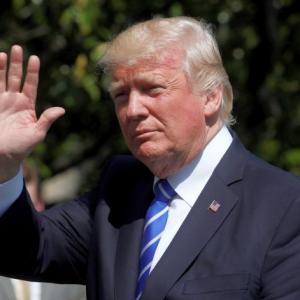