India on Thursday continued to be evasive on its stand to be adopted on the resolution against Sri Lanka at the United Nations Human Rights Commission, triggering an angry walk out in Lok Sabha by United Progressive Alliance constituent Dravida Munnetra Kazhagam and All India Anna Dravida Munnetra Kazhagam, which was joined by the Bharatiya Janata Party and Janata Dal-United.

Amidst demands that the country take a strong stand on the resolution in UNHRC, Geneva, against the human rights violations  in the island, External Affairs Minister Salman Khurshid said India would take the "best possible" decision.

India wants an "independent and acceptable" inquiry into the issue, he added while winding up a short-duration discussion on the issue.

But Khurshid parried questions when members, cutting across party lines, wanted to know the government's "clear cut" stand on why India should not  move a resolution on its own or how it would vote on the proposed US-sponsored motion at the UNHRC in Geneva soon.

Ruling out any direct intervention in Sri Lanka, he said the government needed to be careful, as whatever it would do "should not be thrown back at us in the future as everybody is not our friend".

"We don't play the policeman of the world or the big brother in any country," Khurshid said when members, especially those from Tamil Nadu were agitated that the Centre was "ignoring" the plight of Tamils and the "genocide" by the Sri Lankan army.

Noting the anger, particularly among members from Tamil Nadu, he held out an assurance that sentiments and concerns expressed by them during a debate on plight of ethnic Tamils in Sri Lanka, would be factored in the government's stand at the UN.

Dissatisfied with Khurshid's reply, members of the DMK, AIADMK and BJP and JD-U reply staged a protest walkout.

At the same time, Khurshid sent out a message to Sri Lanka saying "closure" to the 27-year-old wounds, which have spilled over to India, will happen only when "there is acceptance of truth and reconciliation" and Tamils are given dignity, comfort and participation in the country's affairs.

Earlier, members belonging to Congress' allies as well as the Opposition attacked the government for not taking a clear-cut stand. They demanded that India should take the lead in ensuring passage of a resolution against Sri Lanka at an upcoming meeting of the UNHRC in Geneva.

"When the resolution comes, we will take into account what all members said, Leader of the Opposition said, study what has happened on the ground, look at what Sri Lanka has to say, what other countries have to say and then take best possible decision," Khurshid told the House.

"What we do should be effective. It should not be lukewarm. What we do must be fair. How we do it and what to do must be left to the government," he said.

Khurshid said India would press for an "independent and acceptable inquiry into human rights violations so that there is closure to the 27-year-old problem." He made it clear that India would not like to play a policeman to the world and favoured diplomacy at it can achieve what "war cannot do".

"Whatever we say or do today must not tomorrow be thrown back at us in future .... that should not be used against us," Khurshid said. 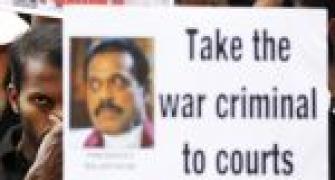 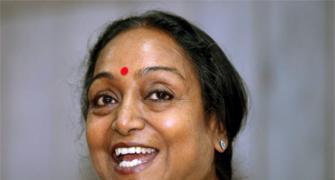 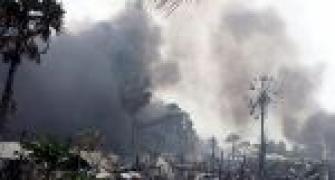 DMK seminar in Delhi on Tamil issue a flop show

Govt under attack in LS over plight of ethnic Tamils