Madhya Pradesh anti-terror police will interrogate suspected Indian Mujahideen terrorist Salman Ahmed to find out if he had any connections in the state, a top Anti Terrorist Squad official said on Tuesday.

"Madhya Pradesh ATS will go to the national capital to quiz twenty-one-year-old Salman who is presently in the custody of Delhi police," the official said.

Though there was no blast in Madhya Pradesh, the police will question Salman alias Chhotu to know if he had visited the state and had connections with any persons.

However, Madhya Pradesh police will have to wait for its turn to interrogate him as Salman is wanted by other states, including Uttar Pradesh, Gujarat, Rajasthan and Delhi also, for his alleged involvement in serial blasts there, he said.

Salman, a resident of Sanjarpur in Azamgarh district who carried a reward of Rs 1 lakh, was arrested by Uttar Pradesh ATS from Siddharth Nagar district, bordering Nepal and is presently in the custody of Delhi police.

Salman is an expert in carrying out blasts. He is also alleged to have received training in handling weapons and explosives during his stay in Pakistan, police sources said.

Following the Delhi serial blasts, Salman spent a lot of time in eastern Uttar Pradesh and then fled to Nepal, where he got a Nepalese passport under a fictitious identity.

Salman had been to different places in UAE and Pakistan, including Sharjah, Dubai, Karachi and Lahore.

There he met several top Indian Mujahideen operatives including Iqbal and Riyaz Bhatkal and even underwent training in arms and explosives, sources said. 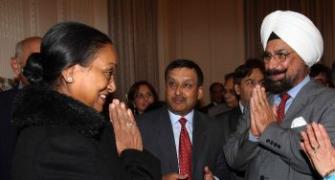