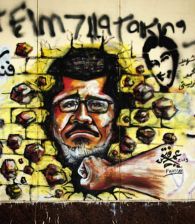 Ousted Egyptian President Mohammed Morsi's detention was extended by 15 days by a court in Cairo on charges that the Islamist leader conspired with Palestinian militant group Hamas during the country's 2011 uprising.

Morsi, 62, overthrown by the military on July 3, was placed in detention on July 26 over his links with the Hamas, which rules neighbouring Gaza.

Egypt's judiciary said that it is extending Morsi's detention for a further 15 days pending an investigation into his collaboration with Hamas.

Court is looking into accusations that Morsi colluded with Hamas and other militant groups to break out of the Wadi al-Natroun prison west of Cairo along with 33 other members of his Muslim Brotherhood group during the mass uprising against his predecessor Hosni Mubarak in 2011.

On June 23, the court said Hamas militants facilitated the escape of prisoners during the tumultuous 18-day uprising that forced out Mubarak.

Earlier in the day, vendors said they have sold hundreds of gas masks, goggles and gloves to protesters readying for police tear gas.

The security officials yesterday announced that their forces will move against the entrenched protest camps.

Egypt, where more than 250 people have been killed in clashes since Morsi was toppled by the powerful military on July 3, braced for more violence as the four-day Muslim Eid celebrations wrapped up on Sunday.

Morsi supporters -- namely the Muslim Brotherhood and its Islamist allies -- have been staging sit-ins at NasrCity's Rabaa Al-Adawiya Mosque and in Giza's Nahda Square, as well as daily rallies demanding Morsi's reinstatement, following his ouster.