The Raksha Mantri was unable to address media queries about how much the Modi government was paying for 36 Rafales compared to what the UPA government had negotiated.
Ajai Shukla reports. 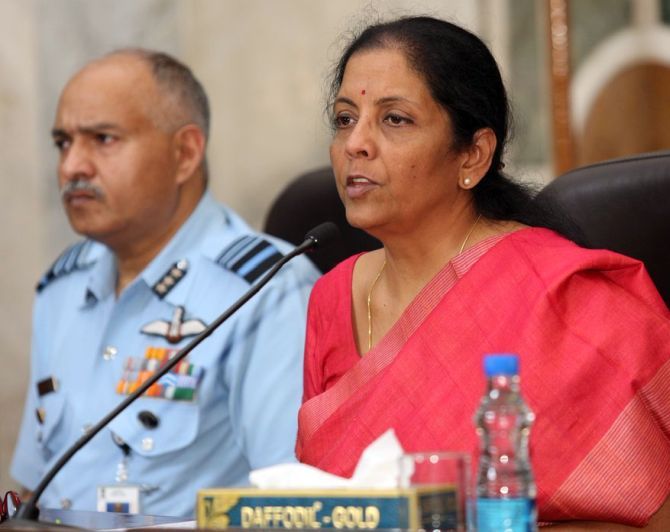 IMAGE: Defence Minister Nirmala Sitharaman lashed out at the Congress on Friday, November 17, saying the party was unable to conclude the purchase of Rafale fighters for an entire decade. Photograph: @DefenceMinIndia/Twitter

First, she stated, the previous BJP government had, as early as 2000, 'recognised the need to strengthen the IAF', leading to procurement being initiated for 126 medium multirole combat aircraft.

Yet, the Congress was unable to conclude the purchase of Rafale fighters 'for an entire decade between 2004 and 2014', she said.

That 'act of omission' had led to severe fighter shortages in the IAF, Sitharaman charged.

'This was the grim situation when this government came to power in 2014,' she said.

In fact, the MMRCA procurement was initiated only in 2007, with the issue of a Request for Proposals.

In April 2011, the IAF ruled out four fighters, leaving only the Eurofighter Typhoon and Dassault Rafale in the fray.

In January 2012, the Rafale was identified as the winner of the contest and negotiations began with Dassault over the cost.

Therefore, the UPA can, at worst, be accused of two years and three months of vacillation, until the BJP came to power in May 2014.

Sitharaman's second rebuttal related to the Congress accusation that Prime Minister Narendra D Modi had not followed due procedure, and not even consulted his defence minister before announcing during a State visit to France in April 2015 that India would buy 36 Rafale fighters in fly-away condition.

'When the prime minister went to Paris in 2015 and agreed (on the purchase of 36 Rafales), he followed the due process of getting it cleared through the Cabinet Committee on Security,' said Sitharaman.

'In September 2016, almost a year-and-a-half later, the Inter-Governmental Agreement for buying 36 Rafales was signed in the presence of the defence ministers of France and India,' she said.

While it is true that the Cabinet Committee on Security cleared the Rafale purchase after Modi returned from Paris, no CCS permission, or from any defence ministry procurement body, was obtained before Modi and then French president Francois Hollande announced the Rafale buy in April 2015. 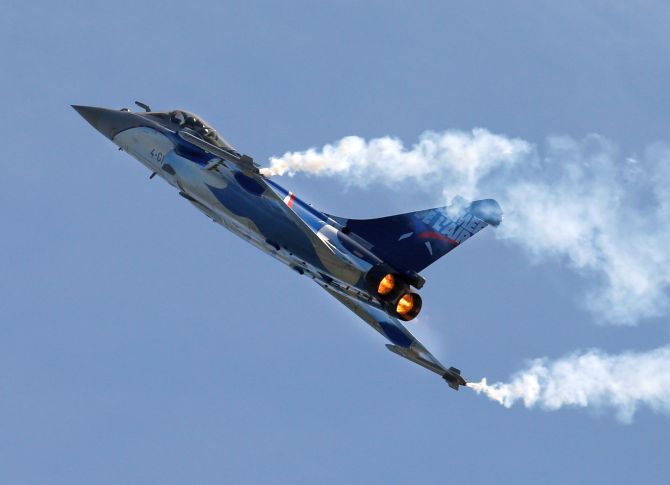 IMAGE: While defending the purchase of the Rafale fighter jet, Sitharaman said the Modi government had able to purchase the 36 aircraft for a cost far lesser than the Manmohan Singh government. Photograph: Denis Balibouse/Reuters

"This is simple economics. When we are talking about building 126 aircraft (in India), ToT makes economic sense. But when you are buying 36 aircraft across-the-counter... it makes no economic sense for ToT to be added on," she correctly stated.

Fourthly, Sitharaman rejected the Congress's oblique allegation that Anil Ambani's Reliance Defence Ltd had benefited from his proximity to the PM to be unfairly picked as Dassault's Indian partner for discharging the 50 per cent offset clause that came with the Rafale deal.

Finally, Sitharaman argued that "the price we have obtained (for the Rafale) is far less (than the UPA)."

However, she was unable to address media queries about how much the government was paying for 36 Rafales compared to what the UPA government had negotiated.

"We will give you the figures that you want," said Sitharaman, directing the query to the defence secretary. However, he did not have the figures either. 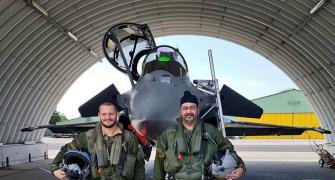