Modi quotes Bob Dylan: 'The times, they are a changing'

Prime Minister Narendra Modi on Saturday quoted lines from Nobel Laureate Bob Dylan's iconic "The times they are a-changin'", a song which had apparently become an anthem of change, to make a veiled reference to the political situation in the country in the backdrop of the demonetisation move as he addressed the Global Citizen Festival in Mumbai. 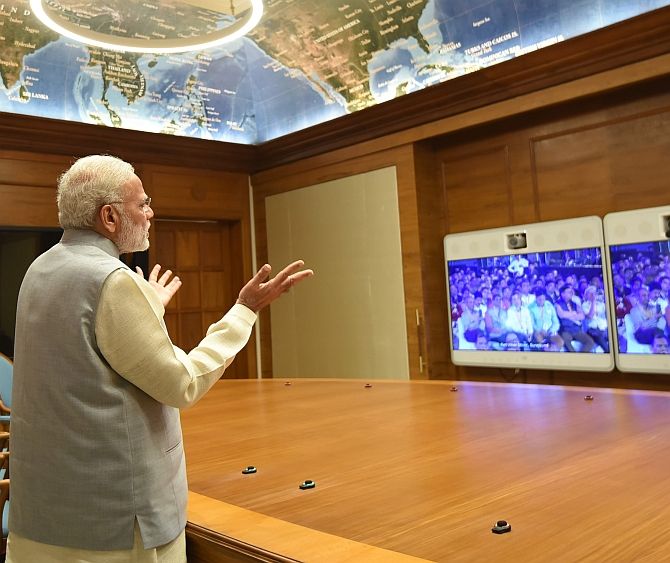 "Back in 2014, I had enjoyed attending the Global Citizen Festival in the beautiful Central Park of New York. However, this time, my schedule did not permit me to come in person," Modi said in a video address to thousands of people who had gathered for the event in suburban Bandra Kurla complex.

"I have had my own set of idols. But you will be perhaps more familiar with Bob Dylan, Norah Jones, Chris Martin and A R Rehman," Modi said.

"So to quote from one of Dylan's transformative anthems which holds as much meaning today as it did when it was first sung in the 1960.

"Come mothers and fathers, throughout the land, and don't criticise, what you can't understand. Your sons and your daughters, are beyond your command. Your old road is rapidly agin'. Please get out of the new one if you can't lend your hand, for the times they are a-changin'" Modi said, quoting Dylan's famous lines from the song released in 1964.

"Elders must learn from these words of wisdom," he said.

"We better get out of the way as indeed the times they are a changing," added the Prime Minister.

"Artistes have often inspired generations. My dear young friends, I'm convinced we can and we will build a Swachh Bharat free of all forms of filth within one generation," he said.

"You bring an energy and idealism that is unparallelled," he said, adding, "you can be the change you want".

At the outset, Modi said, "I know that I stand between you and Coldplay and so will make this brief."

Maharashtra Chief Minister Devendra Fadnavis, who was present at the festival, said, "Young India is eager to hear the Prime Minister."

The Global Citizen Festival India was held at MMRDA Grounds in Bandra Kurla Complex locality and thousands of fans from across the country thronged the event.

The festival featured performances by international as well as Indian celebrities. Apart from Coldplay, Jay-Z, Demi Lovato and The Vamps, Amitabh Bachchan, Shah Rukh Khan, A R Rahman, Ranveer Singh and Katrina Kaif were among the performers.

Global Citizen Festival is focused on creating an impact in areas of education, equality, and clean water and sanitation.

The festival, launched in 2012, partners with the Global Poverty Project, a movement aiming to end extreme poverty by 2030.