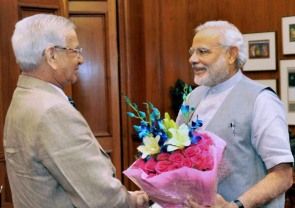 After forcing some governors to quit, the Narendra Modi government on Friday sacked Lt Governor of Puducherry Virendra Kataria, in the first such action against political appointees of the United Progressive Alliance regime.

A late night announcement by Rashtrapati Bhavan said, "The President has directed that Shri Virendra Kataria, shall cease to hold the office of the Lieutenant Governor of Puducherry."

Lt Gen (Retd) Ajay Kumar Singh, LG of Andaman and Nicobar Islands will discharge the functions of LG of Puducherry, in addition to his own duties, until regular arrangements for this post are made, a Rashtrapati Bhavan press communique said.

Prime Minister Narendra Modi, Home Minister Rajnath Singh and other top leaders are believed to have discussed the issue and shortlisted the names.

Political observers interpreted the decision as probably an indirect signal to UPA-nominated Governors to quit or face removal.

A few other Governors appointed by the previous UPA regime, however, continue to remain in office despite the NDA government's pressure. They include K Sankaranarayanan (Maharashtra), Sheila Dikshit (Kerala), Jaganath Pahadia (Haryana) and Shivraj V Patil (Punjab).

Gujarat Governor Kamala Beniwal was transferred to the Mizoram Raj Bhawan on Sunday.

Mizoram Governor Vakkom Purushothaman, who was shifted to Nagaland for the remainder his term, resigned on Friday, resenting his transfer "without consulting him".

Name of former Attorney General Soli Sorabjee is also doing the rounds for being appointed as Governor.

Dikshit and Sankaranarayanan too may be transferred to the Northeastern states, sources said.

However, Dikshit, who met the Prime Minister on Wednesday, denied receiving any hint from the Centre to quit and said she was also not aware of any move to transfer her out of Kerala.