Rahul says Modi a 'formidable enemy', vows to defeat him

Congress leader Rahul Gandhi on Sunday described Prime Minister Narendra Modi a 'formidable enemy' who 'crushed' his opponents and vowed to send him to political oblivion by following the path of love and non-violence. 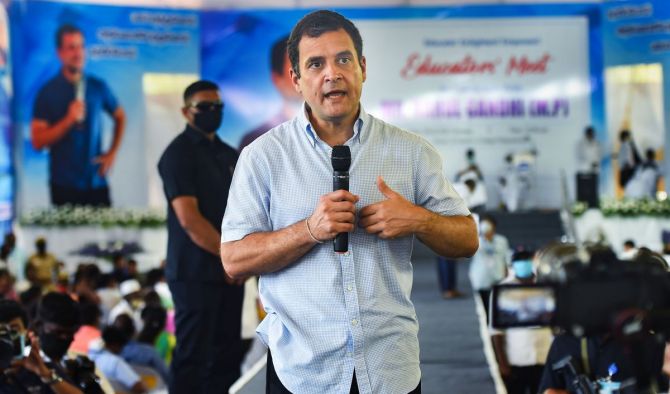 During an interaction titled 'Educators Meet' at the St Xavier College in Tirunelveli, Gandhi, touring southern Tamil Nadu for the second day as part of his second leg of campaign for the April 6 assembly polls, also said he counted on the people's support to defeat the Bharatiya Janata Party.

When a participant wanted to know if Gandhi felt it was possible to nudge the Modi government to implement his 'good ideas' rather than waiting to assume power which seemed 'Utopian', he said it could be done with the 'powerful' and 'valuable' support of the people.

It was important to dream big, though some of it may not come true, he said in an obvious reference to snatching the reins of power from the BJP at the Centre.

"But we have done this before. We have defeated a much bigger enemy (British) than this new enemy that has come."

Recalling the country's independence movement, he said the Britishers were much more powerful than Modi would ever be.

Apparently, he meant that Modi would go into political oblivion after defeat by the Congress with people's support.

Gandhi said this would be achieved without any hatred, anger or violence towards PM Modi or his party even if they may 'abuse' or unleash 'violence' against them.

The Congress leader, replying to another participant, alleged the BJP-led Centre claimed to 'represent Hinduism' in several ideas they espoused, but in reality it had nothing to do with that faith.

Hinduism does not preach insulting, killing or beating up people, Gandhi asserted, alleging 'but they do it'.

The essence of all religions was love but the central government's 'whole game' is to 'steal' money of ordinary people, including farmers through initiatives like farm laws, and give it away to the biggest businesses in the country, he alleged.

When a professor alleged the New Education Policy was agenda driven, Gandhi said any policy on education should be an outcome of deliberations with learners and teachers.

"Unfortunately this was not done," he claimed adding it concentrated too much power in the hands of the Centre and it was set to damage the education system.

Though NEP had a positive aspect of flexibility, it was however, a 'weapon to communalise, to push a particular ideology into the Indian system and that is why I do not like it'.

He batted for more scholarship so that more and more poor students got education and underscored women empowerment.

To a demand on bringing back education to the state list of the Constitution from the concurrent category, he said, "I don't know we will look into it."

Centralising everything was a bad idea and decentralisation and facilitating access to education from all corners of the country were fundamental, he said.

In 1976, the then Congress government led by Prime Minister Indira Gandhi shifted education, which was previously a state subject, to the concurrent list allowing Centre to legislate on the matter besides the states. 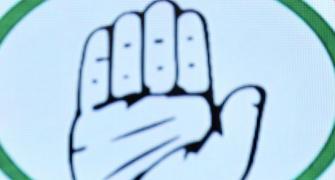 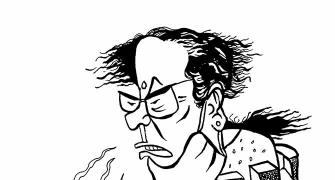