"It is our advice that the person who has made this statement (about opening of liquor shops) should take rest now," the Mirwaiz told a Friday congregation at Jamia Masjid in Srinagar.

He said tourists do not come to Kashmir to consume liquor but to see the beauty of the Valley "bestowed by Allah".

"It is unfortunate that the ruling class, under a plan, is talking about implementing those things which are un-Islamic," he said.

He said the state government, which is headed by Farooq's son Omar Abdullah, should clarify whether promoting "immoral activities" was part of the state policy.

The Hurriyat chairman also hit back at Farooq for his remarks that India is a secular state.

Mirwaiz said those who talk about opening up liquor sale should also know that it is the "root of all evils".

The Hurriyat chairman warned that any act by the state which goes against the teachings of Islam will be resisted.

Farooq, earlier this week, said cinemas should be reopened and advocated sale of liquor in the state to promote tourism. 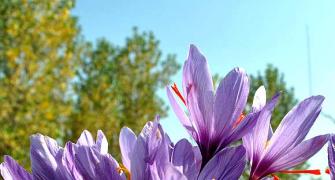 Kashmir's saffron story: Spice with a touch of romance
In Kashmir, the veil over bitter truth needs to be lifted
Omar taken aback by Farooq Abdullah's comments on Kashmir