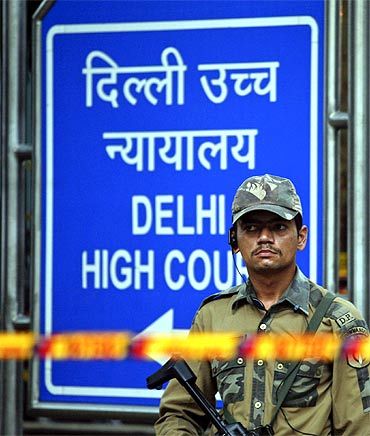 The Delhi high court on Friday sentenced to life imprisonment 12 members of dominant Jat community and 21 other convicts to varying jail terms in the 2010 Mirchpur Dalit killing case in which a 60-year-old man and his physically- challenged teenaged daughter were burnt alive.

The high court said there was a 'deliberate targeting' of the houses of Balmiki community members by the Jats and it was 'an instance of caste-based violence meant to teach the Balmikis a lesson for perceived insults'.

In a 209-page verdict, a bench of Justices S Muralidhar and I S Mehta said 71 years after Independence, instances of 'atrocities' against Scheduled Castes by those belonging to dominant castes have shown 'no signs of abating'.

"The incidents that took place in Mirchpur between April 19 and 21, 2010 serve as yet another grim reminder of 'the complete absence of two things in Indian society' as noted by Dr B R Ambedkar when he tabled the final draft of the Constitution of India before the Constituent Assembly on November 25, 1949. One was 'equality' and the other 'fraternity'," the bench observed.

On April 21, 2010, the house of victim Tara Chand was set ablaze by the members of the Jat community after a dispute between the two communities at Mirchpur village in Haryana's Hisar district, which led the father and the daughter to be burnt alive.

Several other members of the Dalit community were injured and there was 'large scale destruction' of their properties by the Jats, the court noted in its verdict.

On the burning down of the Dalits' properties, the high court said it was not a case of an accidental fire spreading quickly as a result of cow dung cakes or other flammable materials lying around, but a 'deliberate, pre-planned and carefully orchestrated act'.

The trial court had earlier convicted only 15 of the 98 persons accused in the case, but the high court had set aside the acquittal of 20 persons.

Two men, who were convicted by the trial court, have died during the pendency of the appeals.

Of the 20 persons whose acquittal was reversed, five were awarded life term and other 15 sentenced to jail terms of 1-2 years by the high court which said there was sufficient evidence to show that 'a large scale conspiracy' was hatched by the Jats against the Balmikis.

The judgment of the trial court which had awarded life sentence to three -- Kulwinder, Dharambir and Ramphal -- was modified to the extent that instead of holding them guilty of culpable homicide not amounting to murder, the convicts were held guilty under the harsher penal provision of murder.

While Pawan was convicted for murder, the other eight were held guilty of using fire or explosive material to damage the property of a member of the Balmiki community under the SC/ST (Prevention Of Atrocities) Act, for which the maximum punishment is life imprisonment.

Mirchpur village is located on the border between the Hisar and Jind districts of Haryana and is home to several communities such as the Lohars, Chamars, Balmikis, Brahmins and the Jats, who are the dominant among them, the court noted.

While the trial was completed by the lower court in nine months, the appeals were decided by the high court in over six years.

The high court, which had also imposed varying fines on the 33 convicts, said the amounts collected from the convicts shall be used by the Haryana government for pecuniary relief and rehabilitation of the victims.

The court also noted that the members of the Jat community had planned their attack in advance and come to the Balmiki basti armed with oil cans, jellies, gandasis (sickles), sticks and carts filled with stones. It said the properties of the Balmiki community were burnt and looted and their belongings destroyed.

The high court set aside the finding of the trial court that it was not an instance of violence driven by caste hatred.

It said Tara Chand's dying declaration "more than adequately established" the role of some of the accused and the deposition of various prosecution witnesses fully corroborated his statement.

The high court pronounced the verdict on separate appeals of the convicts challenging their conviction and sentence by a trial court in the case. The victims and the police had also appealed in the high court seeking enhancement of punishment awarded to the convicts and acquittal of others.

The trial court had on September 24, 2011, convicted 15 of 97 men belonging to the Jat community. Two convicts had died during pendency of appeals. In October 2012, the 98th accused, who was earlier absconding, was tried and acquitted by the trial court.

On October 31, 2011, the trial court had sentenced Kulwinder, Dharambir and Ramphal to life imprisonment for committing unintentional killing under Section 304 of the Indian Penal Code.

While five others were handed down jail term of five years for their offences including rioting, voluntarily causing hurt, mischief and putting ablaze victims' houses and provisions of SC/ST (POA) Act, seven other accused, convicted under milder penal provisions, were released on probation by the trial court.