The sob story of suspended Indian Administrative Service officer Y Srilakshmi on Friday took a turn for good for her as the Central Bureau of Investigation court in Hyderabad granted her conditional bail, and after completing the formalities, she was out of the jail by the evening.

A tired and exhausted looking Srilakshmi, former Secretary, Mining and Geology Department in Andhra Pradesh government walked out of the Chanchalguda women's jail with in 24 hours after she was sent there under judicial custody.

The court asked her to give two sureties of Rs 25,000 each, surrender her passport to the authorities and not to make any attempt to destroy the evidence.

The CBI had arrested Srilakshmi earlier this week in the illegal mining scam involving former Karnataka minister Gali Janardhan Reddy's Obulapuram company. The CBI has charged her with cheating, dishonesty and corruption among other charges.

After serving three days in the CBI custody she was sent to judicial custody till December 12 on Thursday. According to the jail sources, the officer was kept in barrack number 10 where she continuously cried protesting her innocence. "Some of the staff members had to console her," sources said.

Srilakshmi had sought bail on the grounds of ill health, but the CBI had opposed it saying that the health certificates produced by her were bogus.

Srilakshmi who has been put under suspension by the state government has also sparked off a controversy by saying that she was innocent and she had issued the orders in favour of Obulapuram company at the behest of the then mining minister and present Home Minister Sabita Indra Reddy.

She told the CBI as well as the court that Reddy had made repeated calls asking her to issue the orders to issue the mining lease to Gali's company.

But the CBI gave a clean chit to Reddy when its counsel told the court that the Srilakshmi was trying to save herself by dragging the minister's name and that the minister had not done any thing wrong.

In another development, the CBI arrested on Friday a director of OMC Rajashekhar for his alleged role in getting favours from the AP government.

Rajashekhar, who was being brought to Hyderabad from Bellary by the CBI, is the brother-in-law of V D Rajagopal, the director of mining department who is already in jail.

CBI sources said that Rajashekhar was an important link in the chain and was appointed as the director of the OMC as quid pro quo for the favour Rajagopal had extended to the company.

Rajashekhar is accused number five in the case. Of the other four, former Karnataka minister Gali Janardhan Reddy, OMC managing director BV Srinivasulu Reddy and Rajagopal are already in jail.

Meanwhile, the main opposition, Telugu Desam Party has demanded the arrest of Sabita Indra Reddy in the case.

TDP leader Gali Muddukrishnamma Naidu wondered how the CBI could spare the minister while arresting an IAS officer.

He said it was strange that the CBI counsel gave a clean chit to the minister in the court and put the entire blame on the officer, when it was clear that the former had only carried out the latter's orders, and the then Chief Minister Y S Rajashekhar Reddy.

Meanwhile, the CBI was all set to file its chargesheet in the illegal mining scam case on Saturday. But the agency was already facing the flak from the Opposition for not doing enough ground work and looking in to the role played by the political leaders in this scam.

During the probe, the CBI questioned only two political leaders YS Jaganmohan Reddy, the member of Parliament from Kadapa and the president of YSR Congress, and Sabita who was the minister for mines at the time of the decision.

However, the chargesheet was unlikely to have any unkind word for Sabita, as a counter affidavit filed by the CBI has already given her a clean chit saying the decision to give mining lease to OMC was taken at the level of the secretary.

There were also allegations against other political bigwigs but none of them have been questioned about their alleged role. 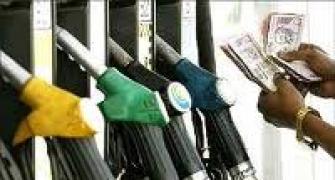 'Cong in pact with Janardhana Reddy to topple K'taka govt'