MHA asks Rahul to prove he is Indian in 15 days

In a move that comes in the middle of the Lok Sabha polls, the Centre issued a notice to Congress president Rahul Gandhi seeking the "factual position" of his citizenship within a fortnight following a complaint by a Bharatiya Janata Party MP, setting off a political row. 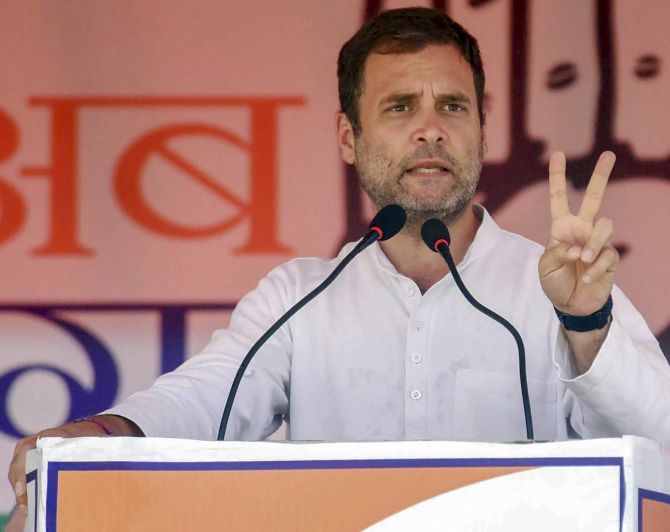 The notice by the Union home ministry on Monday on the complaint from Subramanian Swamy alleging that Rahul Gandhi was a British national was dismissed as "rubbish" by Congress leader Priyanka Gandhi Vadra while her party said the entire world knows the Congress chief is an Indian citizen by birth.

The BJP on its part posed a question asking which is real -- "Rahul Gandhi London wale or Lutyens wale".

A home ministry official said Swamy had first sent a complaint on Rahul Gandhi's citizenship issue in September 2017 and wrote a reminder recently.

As a row erupted, Union Home Minister Rajnath Singh said the notice is a normal process and "not a big development" and that the timing of the communication is not relevant.

Attacking the Congress chief, Patra told reporters in Delhi that the entire Rahul Gandhi's citizenship saga is a story of three Cs -- citizenship, confusion and clarification.

Asked by newsmen in Amethi for her comments on the ministry notice, Priyanka Gandhi said, "I have never heard such rubbish. All know Rahul Gandhi was born, raised here."

When asked about the intention behind the notice, she remarked, "I have not heard anything like this, it seems it is out of fear that they(BJP) might be losing." Citing Swamy's letter, the home ministry said it has been brought out that a company named Backops Limited was registered in the United Kingdom in 2003 with Rahul Gandhi as one of its directors.

The home ministry communication said Swamy's letter also mentioned that in the British company's annual returns filed on October 10, 2005, and October 31, 2006, Rahul Gandhi's date of birth has been given as June 19, 1970, and he had declared his nationality as British.

"Further, in the dissolution application dated February 17, 2009, of the above referred company, your nationality has been mentioned as British.

"You are requested to intimate the factual position in the matter to this ministry within a fortnight of the receipt of this communication," the notice to Rahul Gandhi said.

In November 2015, the Supreme Court had dismissed a public interest litigation seeking a Central Bureau of Investigation probe into the citizenship of Rahul Gandhi while noting that PIL pleas were not meant to target one individual or organisation but was a medium to resolve human suffering through good governance.

A bench of then Chief Justice of India H L Dattu and justice Amitava Roy rubbished the plea questioning the source and authenticity of the documents attached to a petition.

Rajnath Singh told reporters in Lucknow that if any MP writes a letter to any ministry, then necessary proceedings are undertaken by the ministry. "It is not a big development, it is a normal process," he said.

Asked specifically if the timing of the letter raising question on the citizenship of the country's main opposition leader was relevant as it comes in the election season, Singh replied, "No, no. This question was raised in Parliament also. A Member of Parliament (Dr Subramanian Swamy) has written to the ministry several times as well, following which the action has been taken."

In 2016, Lok Sabha Speaker Sumitra Mahajan had forwarded to the Parliamentary Ethics Committee, headed by veteran BJP leader L K Advani, Swamy's "complaint of ethical misconduct" against Rahul Gandhi that he had accessed documents in which the Congress leader had called himself "British".

Rahul Gandhi also questioned the committee's decision to look into a "complaint that is not in order", claiming it was "an endeavour to malign" him.

The panel had issued a notice to him, seeking an explanation to whether he had once declared himself a British citizen on the legal papers of a company in the United Kingdom.

"Prime Minister Narendra Modi has lost the plot. After four phases of elections, it is clear that Modi ji and the BJP are hurtling towards an imminent defeat at breakneck speed. Consequently, they seek to manufacture one malicious and fallacious agenda everyday. These are rehashed allegations of the year 2014-15. I had rejected them then also," Surjewala told reporters in Delhi.

"Modi government should be renamed as a desperate government manufacturing one allegation per day, but your fake allegation will not replace the truth".

The seven-phase Lok Sabha elections is underway of which four phases were completed on Monday.

Rahul Gandhi is seeking re-election from party bastion Amethi in Uttar Pradesh which goes to polls in the fifth phase of voting on May 6. He is also contesting from Wayanad in Kerala where polling has been completed.

An objection on the citizenship issue was also raised by an independent candidate against Rahul Gandhi in Amethi, but the returning officer after scrutiny declared his nomination papers as valid.