The Union home ministry has sent to President Ram Nath Kovind the recommendation of the Delhi government rejecting the mercy plea of one of the convicts in the 2012 Nirbhaya rape-murder case, sources said on Friday. 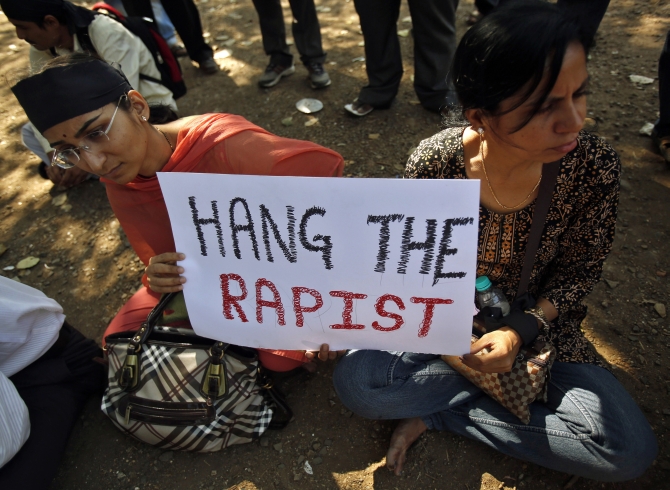 The victim's mother also wrote to Kovind seeking dismissal of the clemency petition.

The development comes on a day when the four accused in the rape and murder of a Hyderabad veterinarian were killed in an encounter by the police.

Seeking to draw a parallel between the two cases, Nirbhaya's parents also said unlike them, the family of the deceased veterinary would not have to wait for justice.

Sources said the file of the convict in Nirbhaya's case had been forwarded to the President for consideration and final decision.

The home ministry has also recommended in the file rejection of the mercy petition of one of the convicts in the Nirbhaya gang rape-and-murder case, an official said.

Vinay Sharma, one of the convicts facing the gallows for the rape and murder of the 23-year-old paramedic student, had filed the mercy petition before the President.

She later succumbed to her injuries at a hospital in Singapore.

The brutality of the rape had rocked the nation leading to massive protests.

The Supreme Court on December 12, 2018, dismissed a PIL seeking direction to the Centre to execute the death penalty awarded to four convicts -- Mukesh, Pawan, Vinay and Akshay -- in the case.

The victim's family, too, has been pressing for speedy justice and execution of the convicts.

In a letter written to Kovind, Nirbhaya's mother said the petition filed by one of the convicts, Vinay Sharma, "deliberately tries to avoid the execution of the death sentence and hamper the dissemination of justice".

"Almost seven years have lapsed since then. The trauma, pain and agony suffered by the applicant (mother) is unbearable and the wait for justice is getting longer and longer," the letter, sent through her lawyer, said.

A Delhi court had recently directed the Tihar Jail authorities to produce the four convicts next Friday so that they can inform the court about the status of their petitions.

The court was hearing a plea by the victim's parents who have sought a direction to the jail authorities to expedite the execution of the convicts.

The plea said the victim's parents approached the court since the convicts had exhausted all legal remedies.