The white marble statue installed in the Bhimrao Ambedkar Samajik Parivartan Sthal was damaged on Thursday afternoon. A big hammer was apparently used to vandalise the face and head of the statue, sources said.

Heavy police force has been deployed on the spot.

UP CM Akhilesh Yadav has condemned the incident. He has instructed to reconstruct the statue immediately.

The guard posted at the park informed police that around four to six motorcycle-borne youths reached the park and started breaking the statue with a big hammer, a senior official said. He said that besides the head, the hand of Mayawati's statue was also damaged by the youths.

note has been taken of the incident and strict action would be taken against those involved in the act.

BSP leader Swami Prasad Maurya also inspected the spot and demanded that the statues be immediately repaired and those involved in the act should be arrested.

A number of pamphlets of the Nav Nirman Sena were also found on the spot.

Earlier, in the day Sena office bearers had told the media that they wanted the state government to remove all the statues of
Mayawati installed in Lucknow and Noida within 72 hours "otherwise they would be doing the same". They also accused Mayawati of being involved in a number of scams. 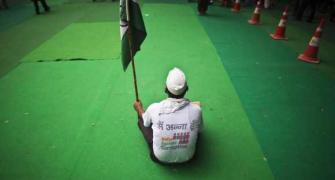 'Country will progress when maximum people are educated'

BSP too decides to not contest against Dimple in Kannauj