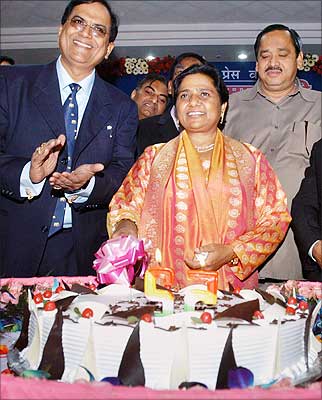 Top civil and police officials vied with each other to offer a piece of cake to Uttar Pradesh Chief Minister Mayawati who celebrated her 52nd birthday on Sunday with the capital wearing a festive look and hoardings and banners coming up across the state.

Clad in a shiny rust salwar-kurta and with a new hairdo, Mayawati, who swept to power in May last year, lashed out at the opposition for "maligning" her government by alleging that public funds were spent on the celebrations.

She also refuted allegations that her party workers had been asking the civil officials for funds for the BSP on this occasion.
"This kind of campaign smacks of an anti-dalit attitude on the part of some parties and a section of the media," Mayawati said.

As the chief minister cut the massive pink cake in the presence of a large number of senior bureaucrats and state ministers at her official residence, there was a mad rush among them to offer her a pie.

Mayawati's residence was decorated with flowers and lighting while arches and gates were erected in the entire state capital. Hoardings were also put up at important intersections.

The entire state capital was literally painted in blue, her Bahujan Samjwadi Party's colour. Gardens and parks especially the Chief Minister's own creation the Ambedkar Park at Gomti Nagar were specially decorated for the occasion.

The chief minister also announced several projects, including Rs 1600 crore scheme for the nine drought-affected districts in the state.

Mayawati lashed out at the previous governments in the state and the Centre for their 'apathy' towards the drought affected Bundelkhand region. She also announced a health insurance scheme for the people living below the poverty line and setting up of an ultra mega thermal project of 4000 mw with the cooperation of the National Thermal Power Corporation at Lalitpur.

To provide training to the state government employees, a centre for good governance will be set up in the state capital, Mayawati said.

Mayawati also announced setting up of two super specialty hospitals in the name of B R Ambedkar at Noida and Greater Noida.

About the Ganga Expressway project, she said a project of such magnitude was being implemented in the country for the first time.

Mayawati also told media persons that mostly infertile and barren land would be acquired for the project and that too with the consent of the owners.

Talking about drought-hit areas in the state, she said 'despite non-cooperation of the Centre, the state government has started relief and development works on a war footing for the people of Bundelkhand and other affected districts.'

Mayawati said her government was committed to the welfare of sarva jan (every section of the society).

Image:  UP Chief Minister Mayawati cutting the cake as her aide Satish Chandra Mishra claps at her residence in Lucknow on Tuesday on the occasion of her 52nd birthday.