Markets across Kashmir opened on Sunday and there was heavy rush of customers thronging shops as curfew was lifted from all parts of Kashmir. 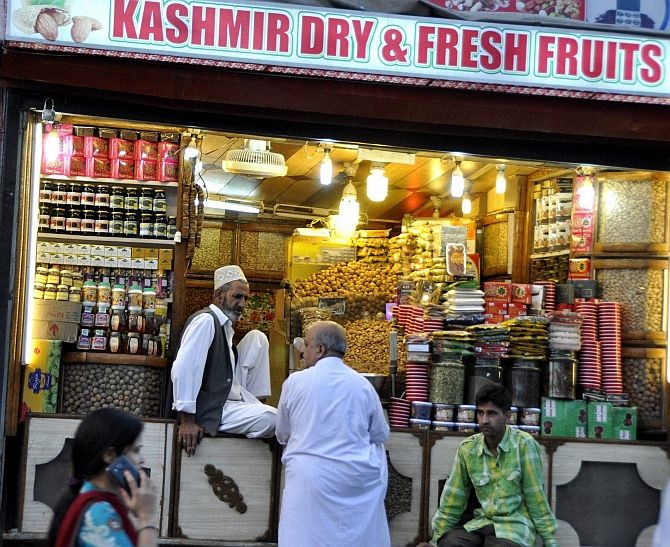 Shops and business establishments which had remained closed for 79-days due to separatist call for shut down opened on Sunday after 2 pm.

There was heavy rush of customers thronging shops as markets opened. Traffic jams were witnessed in the commercial hub of Lal Chowk here and in adjoining areas of the city while other district towns also witnessed movement of large number of vehicles.

The separatist groups have announced a 16-hour relaxation in the shutdown till 6am on Monday.

A police spokesman said the situation across the valley remained normal and no untoward incident was reported from any part of the valley.

"The entire Kashmir Valley is curfew-free on Sunday but restrictions are in place in many parts as a precautionary measure," the official said.

However, miscreants attempted to create disturbances in Anantnag and Sopore, he said.

At Sopore chowk and KP road in Anantnag, miscreants in their attempt to create disturbances pelted stones on shopkeepers when they were opening their shops on Sunday, the spokesman said.

Police and security force deployments immediately reached the spots and chased away miscreants and normalised the situation, he said.

Police, during past 24 hours, arrested 39 more miscreants who were wanted in the offences of harassing shopkeepers, creating disruptions in traffic movement by stone pelting and by placing obstructions on roads and lanes, he added.

He said the curfew was lifted following improvement in the situation on Saturday.

As many as 82 people including two cops have been killed and thousands of others have been injured in the ongoing unrest that started after Hizbul Mujahideen commander Burhan Wani was killed in an encounter with security forces on July 8.

IMAGE: A view of a market during relaxation given by authorities and separatists from strike and curfew in Srinagar on Saturday. Photograph: PTI Photo