A senior security official has claimed that the Maoists had carefully planned the detention of the New Delhi-Bhubaneswar Rajdhani Express and the five-hour hostage crisis on Tuesday.

Around 2,000 supporters of the People's Committee Against Police Atrocities gathered at Pirakati, beside Banstala, on the instruction of the Maoists, he said.

On Monday night, Maoists, including seven to eight women, visited villages like Panisole, Pirakati, Nolbona and Tubrubhola and ordered the villagers to gather at Pirakati, the official claimed, adding that "they warned that villagers who stayed away would be hauled up in a people's court and punished".

At around 2 pm, the agitators stopped a goods train blocking the 'down' line. Forty-five minutes later when the Rajdhani Express came into sight, they waved red flags.

When it appeared that the train would not stop, the PCPA supporters sat on the tracks and forced the Rajdhani Express to a halt.

The driver of the train, K Anand Raj, was dragged out and beaten up.

When he reasoned that he could not stop a train at high speed, they let him off, the officer said.

The assistant driver, K J Rao, and the guard, B B Rao, were made to sit at a nearby tea stall under the watch of tribals, he said.

The PCPA supporters then barged into the train, broke window panes, looted the food, bedsheets and blankets and demanded immediate release their arrested leader Chhatradhar Mahato.

"However, by then we reached the spot at 7.30 pm and took control of the train," the CRPF officer said.
Source: PTI© Copyright 2021 PTI. All rights reserved. Republication or redistribution of PTI content, including by framing or similar means, is expressly prohibited without the prior written consent.
Related News: New Delhi-Bhubaneswar Rajdhani Express, PCPA, Central Reserve Police Force, Pirakati, People's Committee Against Police Atrocities
SHARE THIS STORY
Print this article 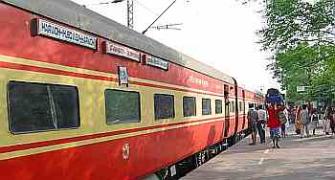