Accepting that it suffered casualties in the Narayanpur encounter, Maoists said on Friday that three of their commanders were killed in the retaliatory fire by the Central Reserve Police Force.

The slain Naxalites included 'platoon commanders' Bandu and Shanker and 'section commander' Ramesh, according to a press release issued by Dandakaranya Special Zonal Committee of the banned Communist Party of India (Maoist), signed by its spokesman Gudsa Usendi.

The release came a day after the police claimed that the security personnel had killed nearly 15 Maoists, whose bodies were carried away by the fleeing Ultras.

While extolling the Maoist guerrillas for their bravery, the release said the rebels not only killed 27 Central Reserve Police Force personnel, including three officers, but also looted eight AK-47 rifles, an equal number of INSAS rifles, three SLRs, two mortars and as many light machine guns.

It said the strike was in response to operation 'Green Hunt' launched by the Centre and the state against the Maoist rebels which, it claimed, had led to the killing of 150 people, mostly innocent civilians, in Dandakaranya region alone.

The outfit expressed regret for the May 17 landmine attack on a bus in which 24 civilians were killed, saying its armed squad mistook the vehicle as one belonging to the police due to a large number of uniformed men sitting atop it.

The Maoist statement also claims that the Narayanpur attack was a "necessary outcome" of the continuing massacre of tribals by the Central and the state government under Operation 'Green Hunt', mass rapes, burning of houses, tortures, illegal detentions and other oppressive methods.

"This attack was specially against the blatant and continuing acts of terror since August 2009 under Operation Green Hunt by the CRPF, the COBRA, the state police and the SPOs," the statement said.

The Maoists have demanded ending the operation and that all paramilitary forces should be called back. It also calls for giving up all attempts to deploy the army to fight Naxalites. 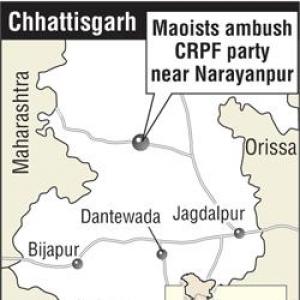 RPF to be equipped with AK-47s, INSAS rifles