Maoists a national challenge, govt has accepted it: Rajnath 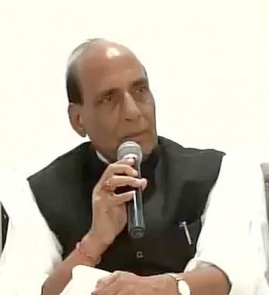 Home Minister Rajnath Singh on Tuesday called Maoists a ‘national challenge’ which he said the government has accepted and will fight it. On a day-long visit to Chhattisgarh, a day after Maoists killed 14 Central Reserve Police Force personnel in Sukma district, he also announced a compensation of Rs 38 lakh each to the kin of victims of the Naxal ambush and Rs 65,000 each to the injured.

"It is a national challenge and we have accepted it. The country has to take on it unitedly. We will succeed in  tackling the menace," Singh told reporters here at the headquarters of the 4th battalion of Chhattisgarh Armed Force.

The Home Minister described the incident as an act of ‘cowardice and a dastardly act’ of violence. Singh said the operation against the Naxals was going on for the past 15 days in Sukma and every time an operation is carried out it is full of risk.

The home minister was present at a ceremony where the soliders were paid the last respects. "In the incident, 14 security personnel were martyred and 15 jawans injured. The injured are undergoing treatment at a private hospital here and all of them are out of danger now. Arrangements are being made to send the body of martyred security personnel to their homes," he said.

Singh said it was an ‘irreparable’ loss but the government is fully concerned towards the family of the slain CRPF personnel. Rs 38 lakh each will be given to the next of kin of the deceased while injured will be provided Rs 65,000 beside free medical treatment, he said.

Briefing about the operation of security forces in Sukma, the home minister said it was going on for the last 15 days and security forces were conducting operations in the dense forests and region difficult to access where there is always a fear of danger.

"Our jawans discharged their duties keeping the national interest at the top. Proxy war is more dangerous than actual war. Our jawans go openly in the danger zone. I am confident that they will succeed in the fight against Naxalism," he said.

Asked about the ‘blame game’ after the incident, he said such kind of incident should not be linked with politics and one should not assess success and failure of the government through this.

"Where there is an involvement of human beings, one cannot rule out chances of lapses. But if lapses happen during operation, our security forces make improvement in it. There is a better coordination between state and the Centre," he said.

He subsequently visited the injured jawans at RamkrishnaCareHospital and took the stock of their health and treatment being provided to them. Naxals on Monday ambushed a security CRPF team killing 14 personnel, including two officers, and injuring 15 in Sukma district.

A huge cache of weapons of the security personnel were also looted by the Naxals. How Naxals gunned down 14 CRPF personnel in 60 minutes