200 'witches' killed every year in India

Source: PTI
July 25, 2010 20:04 IST
Nearly 150 to 200 women are killed every year in India after being tagged as 'witches', a Dehra Dun based non-governmental organisation has said, citing National Crime Bureau's statistics.

Jharkhand is not the only state where women are facing barbaric attacks in the name of witchcraft. Such incidents are common in Orissa, Chattisgarh, Andhra Pradesh and Haryana, Kaushal said.

In the last 15 years, more than 2,500 women were killed after being accused of practicing witchcraft, according to a study conducted by RLEK.

Five women were stripped and paraded naked last year in Patharghatia village in Deodhar district of Jharkhand. In yet another incident, a 40-year old woman was lynched allegedly by her women neighbours at Sikariatand village in Simdega district of the same state, Kushal claimed.

"It is very sad that women are still being killed rampantly after being declared witches. Majority of these incidents are not reported in the media," Kaushal said.

He said in order to overcome the menace a national legislation was needed.

"We will soon file a writ petition in the court of law to seek a remedy in the form of a new legislation from the Parliament on the issue," he said. 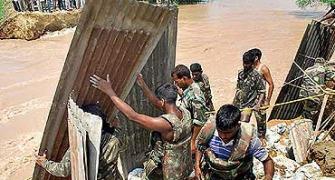 Another couple killed for 'honour' in Haryana?