Insisting that the Pakistani Army is supportive of a dialogue with India, former Pakistan Foreign Minister Khurshid Mahmud Kasuri said Prime Minister Manmohan Singh should visit his country to kickstart the peace process.

Unlike popular belief in India, Kasuri said, both Army Chief Ashfaq Parvez Kayani and Inter-Services Intelligence Director General Ahmed Shuja Pasha favoured peace talks with New Delhi and were supportive of the back channel efforts made by the two countries. He said this during a lecture on India-Pakistan relations organised by the Indian Council of World Affairs.

Kasuri said the the Pakistan Army was "appropriately represented" in the back channel talks and the same also finds mention in the disclosure made by Wikileaks. According the the confidential diplomatic cables made public by the whistleblower website, he said General Kayani and Pasha during separate meetings with US Ambassador to Pakistan Anne Patterson had said that they supported the peace process with India. "The Prime Minister should visit Pakistan," Kasuri said in reply to a question on one single step that needs to be taken to kickstart the peace process. He said the back channel efforts had made significant progress and the two sides were close to a solution.

This was seen in statements made by Pakistan

President Asif Ali Zardari within days of assuming office. Kasuri noted that Zardari had talked about giving some good news regarding the peace process with India. He also indicated that Pakistan was open to strengthening the Joint Anti-Terror Mechanism (JATM) as desired by India. "Government of Pakistan is open to suggestions to improve the anti-terror mechanism... Joint efforts by the two countries will help stamp out the menace of terrorism," Kasuri said.

The former Pakistan foreign minister said much progress was made on India-Pakistan relations during the tenure of General Pervez Musharraf as the President. He said the two sides were even discussing military exchanges during the back channel talks. Kasuri said the peace process was started by the then Prime Minister Atal Bihari Vajpayee and Prime Minister Manmohan Singh took it forward.

On the issue of fundamentalism, he said there were people who exploit emotive religious issues in both the countries. Kasuri said that the protests in Karachi against slain Punjab Governor Salman Taseer were organised by Jamiat Ulema-e-Islam leader Fazl-ur Rahman on the issue of blasphemy laws. "Rahman would not be able to gather 500 people on the issue of Pakistan declaring war against India," he said indicating that there was popular support for the peace process in his country.
Source: PTI© Copyright 2023 PTI. All rights reserved. Republication or redistribution of PTI content, including by framing or similar means, is expressly prohibited without the prior written consent.
Related News: Khurshid Mahmud Kasuri, Pakistan Army, India, Ashfaq Parvez Kayani, Asif Ali Zardari
Print this article 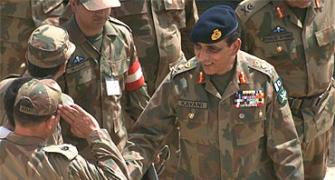 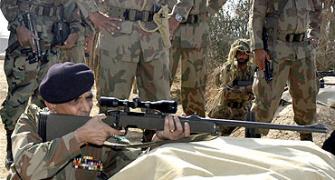 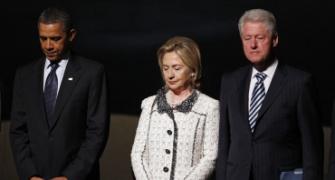