Manmohan's team to be re-cast in April

In the midst of mounting pressure from allies Dravida Munnetra Kazhagam and Trinamool Congress, Congress party strategists are suggesting that a cabinet re-cast could happen in the first week of April.

Also doing the rounds in Delhi's power corridors is speculation over the appointment of four new governors, the names of whom are being finalised by the UPA leadership and would be announced around the same time as the cabinet reshuffle.

With Railway minister Dinesh Trivedi's exit looking imminent, the Trinamool Congress is trying to get Mukul Roy the chair. However, Prime Minister Manmohan Singh is hesitant to do so.

Rumour has it that one section of Trinmool leaders reportedly met the prime minister with a list of criminal cases against Roy and urged him not to elevate the latter to the railway minister's post.

Meanwhile, those involved with the reshuffle are in touch with the DMK leadership, which is seeking to have T R Baalu and Trichy Siva accommodated.

With the allies' in line, UPA government's negotiators would take up discussions with the Samajwadi Party.

The SP, reportedly, will be given the Rajya Sabha deputy chairman's chair. And, in contention for the post is SP general secretary Ramgopal Yadav.

Sources added that the SP will also be given one berth in the Union cabinet along with two Ministers of State.
A Delhi Correspondent
Related News: UPA, Trinamool Congress, Mukul Roy, Manmohan Singh, DMK
Print this article
Pranab's deputy skips Budget presentation
Decision on Trivedi's fate any moment: Trinamool Congress 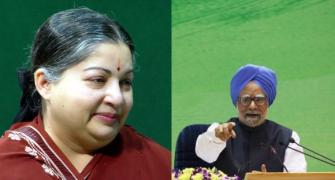 Will inform you about Lankan VIPs' visits: PM to Jaya 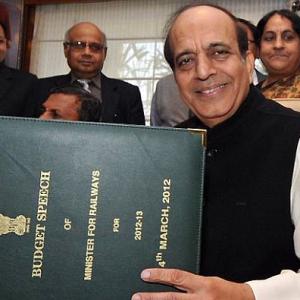 TC wants Trivedi out of LS as well; he wants it in writing

TMC will NOT support Congress in RS poll