Shouting slogans against Rajapakse, Vijayaraj, an unmarried autodriver of Nethimedu, doused himself with petrol and set himself afire at the old bus stand early Monday morning, shocking the waiting passengers.

He was rushed to Mohan Kumaramangalam government hospital in Salem with 95 per cent burns and his condition was stated to be critical, police said.

The man was protesting Rajapakse's visit to Sanchi in Madhya Pradesh this week to lay the foundation stone for an International Buddhist University.

Police pickets have been posted in and around the hospital.

Several parties, including MDMK led by Vaiko, have opposed the visit of Rajapakse, who is held responsible by parties in Tamil Nadu for the alleged war crimes against civilian Tamils in the island nation during the 2009 Eelam war.

Vaiko has announced that he would lead a blackflag demonstration in Sanchi against the visit of Rajapakse.

Madhya Pradesh Chief Minister Shivraj Singh Chouhan has Sunday appealed to Vaiko to give up the protest saying the Sanchi function was completely apolitical. 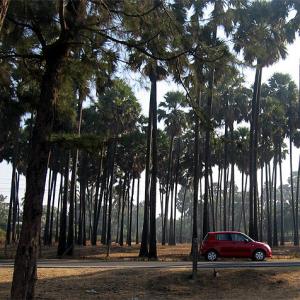