Marking the anniversary of the end of the 34-year-old Communist Party of India - Marxist rule in the state, West Bengal Chief Minister Mamata Banerjee, flanked by her supporters, on Sunday took out a march and claimed that her government had fulfilled most of its poll promises.

Banerjee, who walked for two hours non-stop, was accompanied by Railway Minister Mukul Roy and a large number of supporters and party workers in a 10-km procession which started from the busy Hazra crossing in south Kolkata to Muslim-dominated Razabazar in the eastern part of the city.

"Today was the day last year when a momentous change was brought about in West Bengal after a lot of sacrifices. There was enormous torture during the CPI-M rule for over three decades when 55,000 people lost there lives. Democracy was restored in the state after the ouster of the CPI-M and the Ma, Mati, Manush government was formed," she said in a brief speech at Razabazar.

Asking party leaders and workers to work for the people in a selfless manner, she warned, "If anyone is found working in self-interest, he or she would have no place in the party".

Briefly speaking about her government's performance, the chief minister claimed that her government had created six lakh jobs till date in the state and pointed out that 50 per cent reservation for women had been introduced in the panchayats.

She declared that peace had been restored in Maoist-hit Jungle Mahal and in Darjeeling hills where the Gorkha Janmukti Morcha had signed an agreement with the Centre and the state government to set up a hill council with greater autonomy.

She claimed that almost a hundred per cent of the commitments made before the assembly election last year had been fulfilled by her government in its nearly 12 months in office.

"The rest we will accomplish in the coming days," she promised. 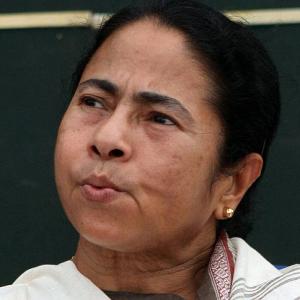