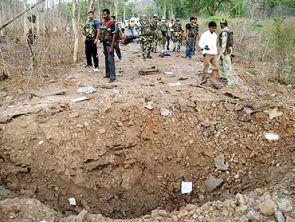 Maoists exploded a series of landmines in the forests of Latehar district and exchanged gunfire with security personnel early on Thursday before the polling began for the Chatra Lok Sabha seat in Jharkhand.

The landmines were exploded at around 1.30 am, half a km from a picket under Barwadih police station, Latehar Superintendent of Police Michael S Raj told PTI.

A brief gun battle also took place, he said. However, there was no casualty. According to police, six landmines were exploded. Maoists posters calling for boycotting of polls were found in some areas of the state like Dhanbad.