Lok Sabha adjourned after passage of 2 bills amid uproar

The government on Monday pushed its legislative agenda in Lok Sabha as the House passed two bills amid uproar by opposition members over the Pegasus row and farmers issue. 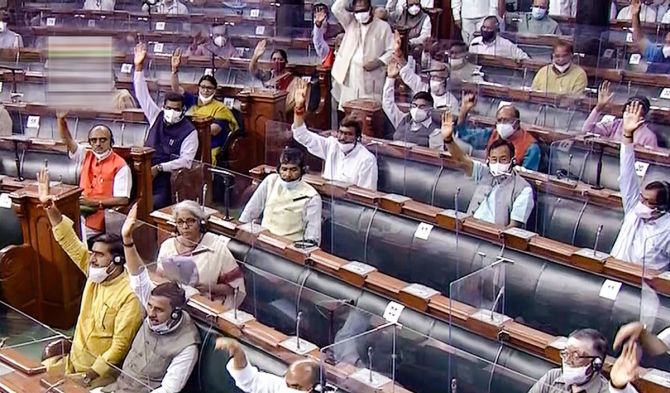 IMAGE: A view of the Lok Sabha during the Monsoon Session of Parliament, in New Delhi, on Monday. Photograph: LSTV/PTI Photo

These are the first two bills to be passed by Lok Sabha in the Monsoon session which began on July 19.

As soon as the House met at 3 pm after repeated adjournments during the day, Lok Sabha took up the Factoring Regulation (Amendment) Bill, 2020, and the National Institutes of Food Technology, Entrepreneurship and Management Bill, 2021, separately.

Discussion on the two bills could not take place as Opposition members continued to stage protests demanding a discussion on the Pegasus snooping allegations and the farmers' demand of repealing the agri laws.

Rama Devi, who was chairing the proceedings, repeatedly urged protesting members to return to their seats and participate in the discussions.

However, with protesting MPs not relenting, she went ahead with the consideration and passage of the two bills.

Parliamentary Affairs Minister Prahlad Joshi urged the oppositon to participate in the debate on the bills and said the issues raised by them could be taken up.

Soon after the bills were passed, the House was adjourned for the day.

Earlier in the day, the House saw repeated adjournments and when it met at 2 pm and ran for a few minutes, papers were laid on the table and Finance Minister Nirmala Sitharaman introduced the Insolvency and Bankruptcy Code (Amendment) Bill, 2021.

As soon as the House met in the morning, Speaker Om Birla paid tributes to personnel of the armed forces for their valour and sacrifice during the 1999 Kargil War.

On the 22nd anniversary of 'Operation Vijay', mounted to flush out Pakistani troops from the heights of Kargil, Speaker Birla also expressed his gratitude to the family members of the heroes of the war.

Members observed silence for those who made the supreme sacrifice.

He also congratulated Mirabai Chanu for winning a silver medal at the Tokyo Olympics.

While the Pegasus snooping row remained the dominant issue with the Opposition members, they also raised slogans and displayed placards in support of agitating farmers.

Some opposition members demanded the presence of the prime minister in the House and raised slogans such as 'Modi sarkar jawab do' (Modi government give answers) on the Pegasus issue.

"The government wants to give a reply. If you want a reply, please go back to your seats ... people choose you to raise their issues. You are raising slogans ... this hurts the dignity of the House," Speaker Birla said. 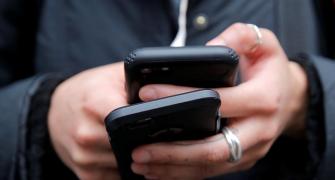 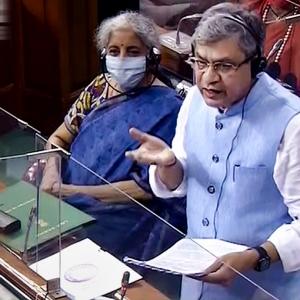