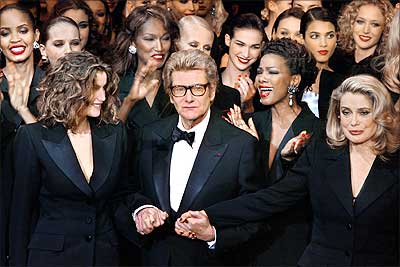 Fashion guru Yves Saint Laurent, considered the greatest fashion designer of the 20th Century, has died in Paris at the age of 71.

Saint Laurent designed clothes that reflected women's changing role in society. He was credited with reworking the rules of fashion by putting women into elegant pantsuits that came to define how modern women dressed.

From the first YSL tuxedo and his trim pantsuits to see-through blouses, safari jackets and glamorous gowns, Laurent created instant classics that remain stylish decades later. He retired in 2002 and had been ill for some time.

The great designer died last evening, the Pierre-Berge-Saint Laurent Foundation announced. Pierre Berge, the designer's former business and personal partner, said Laurent had died at his home after a long illness. He did not give details.

The editor of British Vogue, Alexandra Shulman, told BBC that he had helped democratise fashion.

"Before that people had small salons for rich people. Saint Laurent brought it to the people. He was young and groovy. Pop stars were hanging out with him and younger generations related to him," Shulman said.

Born into the Algerian city of Oran, Laurent won a dress design competition at the age of 18.