The meeting of the Congress Core Group was held at a time when government is scrambling for numbers to pass the Lokpal Bill in Rajya Sabha with Trinamool Congress insisting that it will move amendments to delete the provision for setting up Lokayuktas at the state level.

After the meeting, both the Prime Minister and the Congress President refused to answer questions from media persons whether the Trinamool Congress was "on board" on the Lokpal issue.

Union Ministers Kapil Sibal and Pawan Kumar Bansal, who are not members of the Core Group, also participated in the meeting.

Sources said the government will keep all options open, including the one to convene a joint session, if the Rajya Sabha fails to adopt the Lokpal Bill. It all depends on what course the debate in Rajya Sabha takes place.

The government's thinking is that it would look 'awkward' to again send the bill to a Joint Select Committee when a Parliamentary Standing Committee has gone deep into the issue and come out with an exhaustive report.

Trinamool Congress, which has six members in the Rajya Sabha, has stated that it will "strongly" oppose the provision and want the deletion of Part III of the Lokpal and Lokayukta Bill, 2011 which deals with setting up of Lokayuktas at state level.

The bill passed by Lok Sabha two days ago has provisions for setting up of Lokayuktas in the states with the consent of state governments. 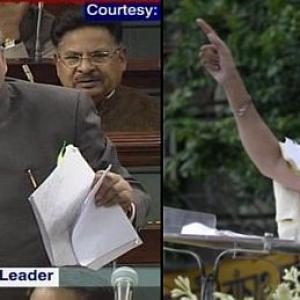