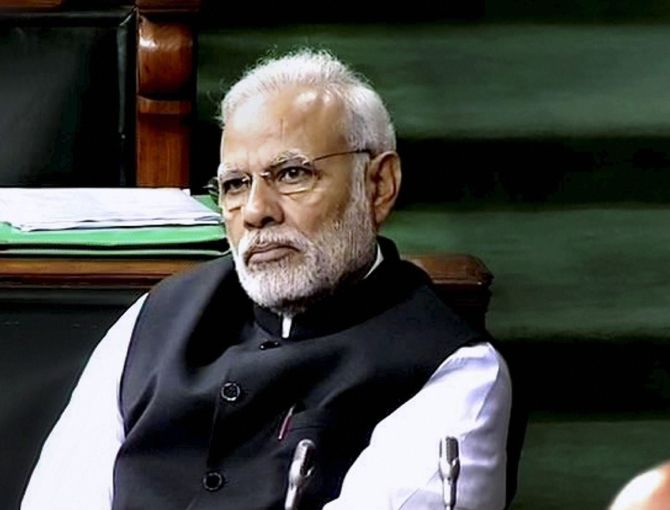 The Opposition on Wednesday criticised the general budget as one lacking in vision and offering no growth prospects, as it again targeted Prime Minister Narendra Modi, saying he ‘followed’ Pakistan in deciding on demonetisation and launching a surgical strike ‘on our own people’.

Congress leader Veerappa Moily initiated the debate in the Lok Sabha on the Union Budget 2017-18 in which he picked holes in the government’s economic policy and targeted Modi over a host of issues, like in the past few days.

Attacking the government over demonetisation, he said it has offered no gain for the common man on whom ‘the state was unleashed’. While Modi and other Bharatiya Janata Party leaders have already begun toning down on the issue in their election speeches, they have not done so in Parliament due to ‘false pride’.

Reasons like fighting corruption, black money and fake currency cited by Modi to justify demonetisation were the same given by Pakistan when it took a similar decision in June 2015 and no other country which has done so ever gave such reasons, the former Union minister said.

“It dawned on the prime minister that Pakistan has taken a right step. Let’s follow it. For the first time, we have followed Pakistan. It is unprecedented... It is not worth following Pakistan,” he said.

Criticising the budget, he said the time was ripe for a forward-looking budget but it turned out to be a timid one, without any will power or vision to take the country forward. 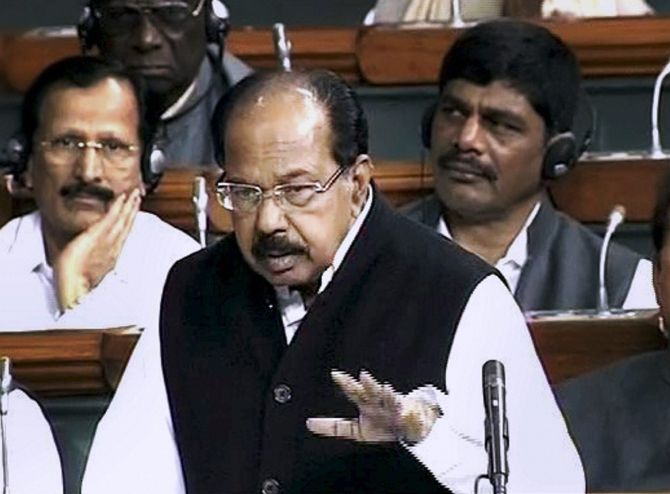 Moily said his party supported merger of plan and non-plan funds and railway budget with the Union budget, saying these were good steps forward but the exercise was ‘messed up’. “We are not fundamentally against it,” he said.

Noting that the Survey presented before the first budget of the Modi government had said that fundamentals were very strong and the legacy was good, he said the attack on the United Progressive Alliance government over its handling of the economy was political or what many people say ‘jumla’.

Demonetisation hit informal sector hard and caused job losses which was not addressed by the budget, he said.

All critics of the government were painted as criminals, terrorists and black marketeers and those supporting it were portrayed as patriots, Moily said.

Moily said while Indira Gandhi by nationalising banks had brought banking to the doorstep of the people, the prime minister is taking away banks from the poor.

At the time of demonetisation, the government had estimated that about Rs 5 lakh crore will not return to the banking system, but now not even Rs one lakh crore has stayed out, the Congress leader said.

“Money in circulation cannot be called black money. I don’t know who is advising you. The government is deaf regarding the problems caused due to demonetisation,” Moily said.

Criticising the government’s contention of moving towards a cashless society, he said except Sweden, there is no other country which has a cashless economy.

“You have shaken the trust of the people and now you are not lifting the withdrawal curbs because you fear there will be a run on the banks. The less cash economy is a disaster... I hope one day there will be an apology in Parliament for the demonetisation move,” he said.

Opposing the Budget, Trinamool Congress MP Saugata Roy said, “Finance Minister Arun Jaitley has not rocked any boat" and has only treaded on a ‘conservative path’ instead of undertaking reforms.

The government had expected a windfall of Rs 4-5 lakh crore on account of demonetisation but as much as Rs 15 lakh crore has come back into the banking system, the TMC leader said, adding that demonetisation has ‘harmed the economy’.

He said the Budget had increased the total expenditure by only 6 per cent to Rs 21.46 lakh crore, which is less than 10 per cent increase every fiscal.

“Jaitley was faced with the difficult task of lessening the adverse impact of demonetisation and had to give sops to middle class,” Roy said.

He said there is no measure in the budget to increase employment and Mahatma Gandhi National Rural Employment Guarantee Act allocation should have been increased by 10-15 per cent to generate employment in rural areas.

With regard to changes in rules for donations to political parties, Roy asked ‘which person will go to banks, disclose their identity and buy bonds? This is not the way... There should have been state funding of elections’.

Various taxes collected by state governments declined by 11 per cent due to demonetisation, while mining royalty recorded a 40 per cent decline.

He also demanded waiver of farm loans and increase in the Minimum Support Price. Citing the Economic Survey, Singh said of the total loan defaulters, 71 per cent was done by top 50 Indian companies.

Jaidev Galla (Telugu Desam Party) lauded the ‘historic’ merger of railway budget and general budget as also the capital tax gains relief extended to people whose land has been taken to build Amravathi, the new capital of Andhra Pradesh. He sought special benefits for AP in terms of taxes, as given to Uttarakhand, Himachal Pradesh and Odisha.

Backing the government's demonetisation move, Galla said to curb the menace of black money, Rs 2,000 notes should be scrapped and Rs 200 notes brought in instead.

A P Jithender Reddy (Telangana Rashtra Samiti) asked the Centre to start an AIIMS in Telangana, as promised under the States Reorganisation Act. He also demanded that the state be allocated more IPS and IAS officers as the number of districts has gone up.

He also sought two battallions of central forces to deal with the Maoist problem on the Telangana-Odisha border and lamented that the bifurcation of the high court was still pending.

P Venugopal (All India Anna Dravida Munnetra Kazhagam) backed the government for advancing the budget date and merging the finance and railway budgets.

Terming the presentation of budget as ‘attractive’, P Karunkaran of the Communist Party of India-Marxist said the impact of the demonetisation has been disastrous for the people. Karunakaran slammed the government for ‘inadequate’ allocation for key sectors like health and education. He said capital expenditure of 1.84 per cent of Gross Domestic Product in 2017-18 was less than 1.86 per cent in the current fiscal.

The CPI-M leader also referred to the Economic Survey to say that there will be a decline in farm growth and joblessness and attacked the government for not passing the benefit of low global crude prices to the people.

As against a Schedule Caste population of 16.6 per cent, the budget allocation for their welfare was just 2 per cent, while for 8.6 per cent ST population, the outlay was just 1.48 per cent. The CPI-M member also demanded that the Women Reservation Bill must be tabled in Lok Sabha at the earliest.

Mithun Reddy (Yuvajana Shramika Rythu Congress) said the government must fulfil the promises made during reorganisation of Andhra Pradesh and sought declaring it as a special category state.

Reddy, Karunakaran and a number of other MPs also raised the issue of farm distress and many of them demanded total loan waiver for farmers.

Sharad Tripathi (Bharatiya Janata Party) took a potshot at the Congress for calling the government a ‘suit-boot sarkar’ and said, “Those known for suitcase brand of politics are now talking about suit-boot ki sarkar. Does a son from a poor family not have the right to wear a suit? He (Modi) is drawing respect across the world. Why can’t he wear a suit?”

He also attacked the Samajwadi Party government in Uttar Pradesh for ‘failing’ to implement various centrally sponsored schemes in the state.

Mohammad Ashraf Haq (Cong) said the country cannot embark on the path of growth and development without taking the Muslim community along.

Earlier when Moily was speaking, Congress leader Mallikarjun Kharge rose to ask him to cite all the measures the United Progressive Alliance had taken to curb black money, a point he wanted to make earlier in the day but was not allowed by the speaker.

Kharge had come prepared to speak about a day after the prime minister had hit out at Congress for doing nothing to root out black money during his reply to the debate on Motion of Thanks on the President’s Address.

As Kharge turned to Moily, Finance Minister Arun Jaitley sensed an opportunity to take a jibe at him. “You had done so much that it took you 24 hours to realise this while Moily has still not realised it,” he said wryly.

Attacking the budget, Moily said it showed there was no synchronisation between various departments of the government, and between the economic survey and its contents. Hardly nything has been done for health and education sectors.

Taking a dig at Modi, he said besides his regular ‘Mann ki Baat’, he should have ‘Kaam ki Baat’ for his government.

Later, Prem Singh Chandumajra (Shiromani Akali Dal) asked the government to implement the recommendations of the Swaminathan Commission on the farm sector which suggested that the minimum support price should be above 50 per cent of the cost of production.

Asserting that the states like Punjab in the bordering areas were suffering, he asked the government to provide incentives to such states.

Welcoming the demonetisation drive of the government, H D Deve Gowda (Janata Dal-Secular) said the government will have to take further steps to remove black money.

He also wanted to know how much employment has the government provided over the last two-and-half years.

“To what extent you (government) have created jobs,” he asked, adding that if not, then what have been the reasons for the same.

Drinking water, he said, still remains a problem in Karnataka and requested the finance minister to take steps to save the farming community.

Suresh Angadi (BJP) said the Union Budget 2017-18 was a ‘budget for all’ as everyone has been benefited from it. “This budget is for middleman, poor, farmers and woman,” he added.

He urged the finance minister to reduce service tax on plastic money and said tax defaulters would be punished as there were stringent laws for it.

Agadi, who was praising the government, was interjected by Gowda who said that ‘I don’t (referring to Agadi) think’ that all the work has been done during the tenure of Modi.

Gowda said a lot of development and work has been taken place during the tenure of former Prime Minister Manmohan Singh also. 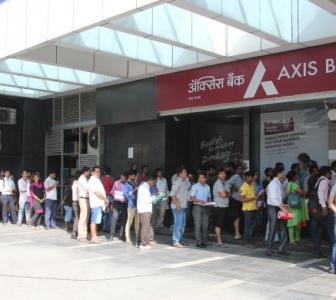 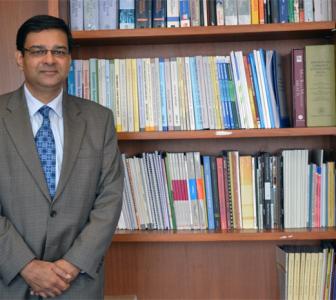 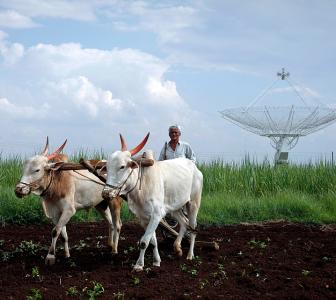 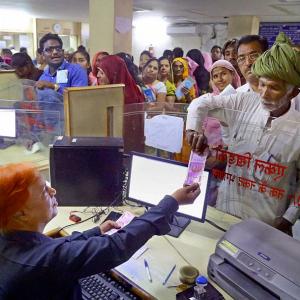