Bihar deputy chief minister Sushil Kumar Modi on Friday said that the Lok Janshakti Party left the National Democratic Alliance as it wanted more seats than what the Bharatiya Janata Party was willing to give. He also said, "The LJP is a vote katwa (divider of votes) party, they don't want a BJP government in Bihar."

"The LJP was asking for more seats than what we wanted to give, so the matter broke down. Nowadays, some leaders of the LJP are spreading rumours and asking why did the Prime Minister (Narendra Modi) and Amit Shah not stop the LJP from leaving the NDA," said Sushil Kumar Modi.

"Who are they to question Union minister Amit Shah and Prime Minister Modi? Also, if the LJP is opposing Nitish Kumar as the chief minister of Bihar, then it means that they are against both Modi and Shah," he further said, and added that on one hand the LJP praises Prime Minister Modi while on the other they oppose Nitish Kumar.

The LJP, which has come out of the NDA in Bihar, has decided to put up candidates on seats contested by the Janata Dal-United.

It has announced candidates on 27 seats going to polls in the first phase of state polls.

The counting of votes will take place on November 10. 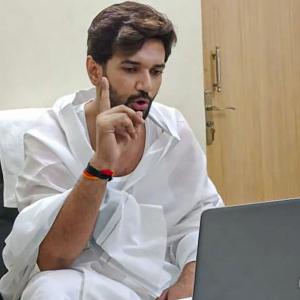