Senior journlist R Rajagopalan, who travelled through Tamil Nadu, says it will be an election of many firsts. Will Tamil Nadu have a hung assembly?

Or will it have a coalition government, a first for the southern state?

Electioneering in Tamil Nadu has picked up but the voters are confused by the emergence of the third front which, for the first time, has given them a choice apart from Chief Minister Jayalalitha’s All India Anna Dravida Munnetra Kazhagam and rival M Karunanidhi’s DMK.

The real fight, as always, is between Jayalalitha and Karunanidhi.

Whatever one may speculate about the emergence of the third front with actor Vijayakanth projected as its CM candidate, the voter’s choice is either the DMK or AIADMK.

Needless to say, the third front will prove to be a spoiler for Karunanidhi, as it will help consolidate voters in favour of the AIADMK. By cutting into the DMK’s votes, Vijayakanth will end up rendering indirect help to Chief Minister Jayalalitha.

Interestingly, the 2016 Tamil Nadu assembly polls have thrown up many firsts.

This reporter, having observed the electoral scene since 1967, and having toured some 35 assembly constituencies cutting across 10 districts over the last 10 days, could see
that election fever has clearly set in over the state.

Political analysts forecast that things will pick up further in the first week of May, the reason being that the entire state is now reeling under a heat wave. Even leaders of political parties are concerned about their cadres dying due to sunstroke. For the first time, Jayalalitha’s election rallies have seen four deaths from the heat wave.

A clever post-poll strategy adopted by the AIADMK general secretary is to contest all the 234 assembly constituencies on her party’s two-leaves symbol, even getting her allies to do so.

But does this mean she foresees a hung house? Or does she apprehend her allies will switch sides after the poll results are out?Does she fear that in the Rajya Sabha her allies would
vote for other party candidates?

The DMK, for the first time, has played its political cards with caution. It stated categorically to its ally the Congress that the post-poll scenario would see a DMK government, no coalition. No berths will be given to the Congress, or to any other poll ally.

With this, the two major political parties have sent out a major message to Tamil Nadu’s five crore voters. If you want a single-party rule, vote for us.

For the first time, the states’ voters are faced with five to six chief ministerial candidates; in all the earlier polls they had only two, either Karunanidhi or Jayalalitha. But this time, the Desiya Murpokku Dravida Kazhagam has put up its chief Vijayakanth, while the Pattali Makkal Katchi has named Anbumani Ramadoss. With a multiplicity of contenders, the voters have
clarity about their choice.

Another interesting development, for the first time, is the rural and urban divide which was never seen earlier in Tamil Nadu. In urban areas the DMK’s Karunanidhi has been in a strong position but that theory was demolished by Jayalalitha in the 2014 Lok Sabha polls when the AIADMK won 37 out of 39 parliamentary seats. This landslide victory eliminated the DMK as a strong opposition party.

The AIADMK, however, is solid in rural areas, thanks to the strong foothold it gained from the pro-poor image of its founder and celluloid titan MGR. Video and audio clips of his films from the mid-1970s are still having a draw in 2016. That encashment of MGR voters continues, with Jayalalitha tapping some 10 to 20 percent of the old voters.

For the first time, too, the state-level parties have been reduced to district parties.

The PMK, a Vanniyar support-based political party which has influence over five districts with 40-45 assembly constituencies, may be termed not as a state party but a district party --
that represents the sentiments of the Vanniyar community.

Voters are certainly a confused lot, especially with the emergence of a third front headed by yesteryear superstar Vijayakanth who is affectionately called the "black MGR". He has 5.5 to 6 percent of the state votes, basically people who fans of his movies. But they are not that politically mature or savvy, just blind followers who think a superhero will do good for the common man.

Vijayakanth has six district-level parties with him in the Peoples Welfare Front. The Viduthalai Chiruthaikal Katchi controls some select pockets, say, covering some 30-40 assembly segments. Similarly, G K Vasan’s outfit the Tamil Maanila Congress has state-wide cadre support but influence only in a few districts. The Marumalarchi DMK led by Vaiko is a formidable force, but again it does not have a pan-Tamil Nadu organisation but exists only in a few select areas. Vaiko, the architect of the third front, is dead against DMK, especially M K Stalin. But that would obviously benefit Jayalalitha, according to political observers.

The Bharatiya Janata Party and Congress, two all-India political parties, for the first time have become irrelevant in Tamil Nadu politics, with the space occupied by them taken over by
the third front of Vijayakanth.

The DMK and AIADMK cadres have also for the first time become violent and restive due to intra-party factions.

For the first time Jayalalitha seems to have been taken back as her authority to select a candidate for a particular constituency was questioned by the cadres revolting against her choice.

Similarly, in the DMK, the MK Stalin group is dominant. The Karunanidhi family’s internal problems between Stalin and Kanimozhi have also come out in the open after the DMK announced
its candidates, showing that Karunanidhi has lost control over the DMK organisation.

Both Karunanidhi and Jayalalitha have been addressing poll rallies while seated in a chair, the 68-year-old chief minister doing so for the first time in her political career.
Her rival, the 93-year-old Karunadhi, is confined to a wheelchair. Both the leaders use the ambulift to reach the dais from where they address rallies.

DMDK leader Vijayakanth addresses rallies the conventional way, standing on the podium. But his voice is not very clear and the common man cannot make out the theme and thrust of his speeches. It mostly consists of cheap jokes and one-liners. But he attracts huge crowds.

For the first time, the Sri Lankan Tamil issue is not part of the election campaign even though all parties have shed crocodile tears in their manifesto over the issue.

The young voters of Tamil Nadu, who are either first- or second-time voters, are enthused by the use of social media in the election campaign. Political jokes are flying thick and fast on WhatsApp and Facebook.

For the first time there are 28 news TV channels in Tamil beaming election programmes live. This includes channels owned by the AIADMK, DMK, PMK, DMDK and Congress all of which have their own TV channel.

Election 2016 is certain to throw a challenge to many of the district-based parties like PMK, MDMK and DMDK. Certainly it is a do-or-die situation for both the AIADMK and DMK which are facing a pushback for having ruled for more than 50 years between them.

However, looking at the total picture, it is clear Jayalalitha has an edge over other rivals, including Karunanidhi. Out of 234 assembly seats in the state, she might end up with three digits, say, around 110-120 seats, although she will need more seats to have a comfortable majority.

All other political parties in Tamil Nadu – the DMK, DMDK, MDMK, VKC and Congress -- will have a two-digit tally.

Image: A worker carries a cut-out of DMK chief M Karunanidhi next to that of other political leaders installed for display at Marina beach. Photograph: Babu/Reuters

Senior journalist R Rajagopalan is a keen Tamil Nadu watcher who has been covering the state assembly elections since 1967. 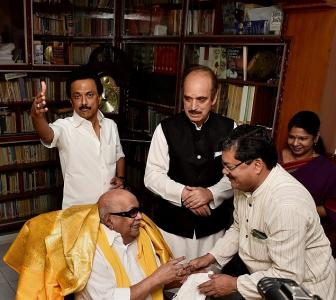 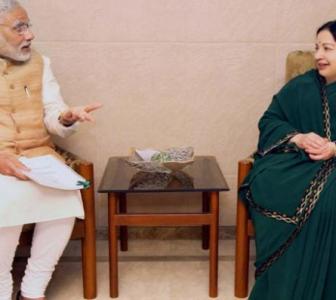 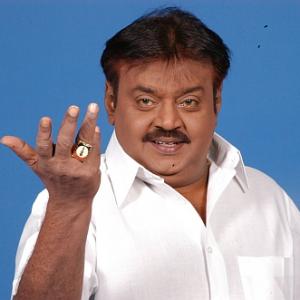