Source: PTI
Last updated on: February 02, 2010 23:20 IST
A top Madhya Pradesh policeman on Tuesday shocked his audience when he hailed Ajmal Kasab, the lone terrorist arrested during the Mumbai terror attack, as a good role model during his speech.

Inspector General of Police (Special Forces) Rajendra Kumar cited the example of Kasab, 21, to buttress his point about the importance of undergoing a good training.

"If you are trained well, you can do anything," he said.

"An example is the Pakistani terrorist Ajmal Kasab. He studied up to class 8 and received (terror) training for just one year. With this, he could operate weapons and gadgets and GPS devices. He could do this because he had passion and he trained very well. He could operate technology well because he trained himself well," Rajendra said.

The top cop went on to say that "Kasab is only an eighth standard pass. Still, he can use all sorts of weapons".

"He (Kasab) had the zeal in him. Can't we have the same (zeal) like his? We are more educated than him, we are more able than him," he added.

"Learn from Kasab about how to handle weapons," Rajendra added.

Kumar later said, "If somebody felt bad, I am sorry for that, but I have also cited other people like Sachin Tendulkar."

Kumar denied that he had praised Kasab in his remarks, made while inaugurating a state-level shooting competition of the Madhya Pradesh police at the Border Security Force's Reoti Range near Indore.

"I am not praising Kasab. I strongly condemn Kasab. He should be given the maximum punishment," he added.

"My only aim was to motivate jawans in the area of shooting so that they can give a befitting reply to the terrorists," he asserted.

"My point was that we should take better training because ultimately we have to face this type of terrorist situation (26/11) in the future. Unless we are very well trained, we cannot deal with them (terrorists)," he added.

Defending himself, Kumar claimed that both Lord Ram and demon king Ravana are often quoted as parallel examples in the country. 'I don't want Kasab to be given a death sentence'
Kasab wants to be tried by an international court
Kasab's latest ploy: 'I didn't kill the cops'

A year on, Kasab replies to judge in Marathi 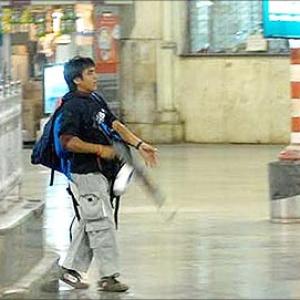 'Kasab killed my family, he has no right to live':