Restrictions on the movement of people were eased and landline phone services restored in some areas of the Kashmir Valley on Saturday, even as stringent security arrangements remained in place, officials said. 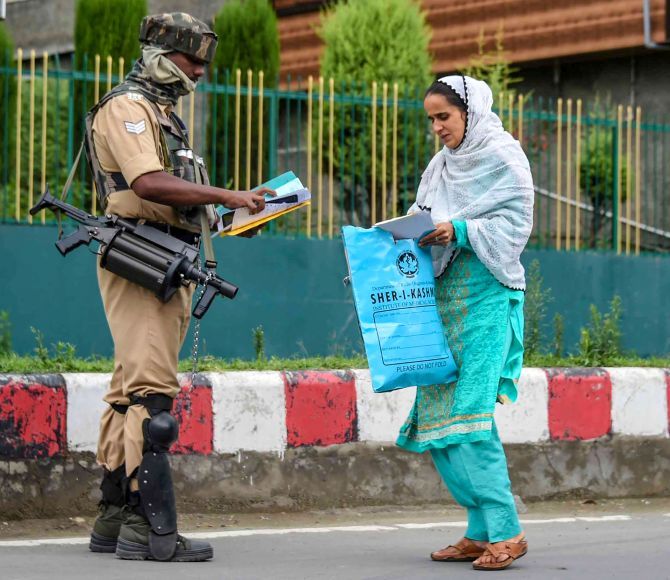 They said the restrictions have been relaxed in 35 police station areas of Kashmir while 17 telephone exchanges out of 96 have been made functional.

More than 50,000 landline phones were operational now, the officials said, adding that the services will be restored in other areas in a "calibrated manner". 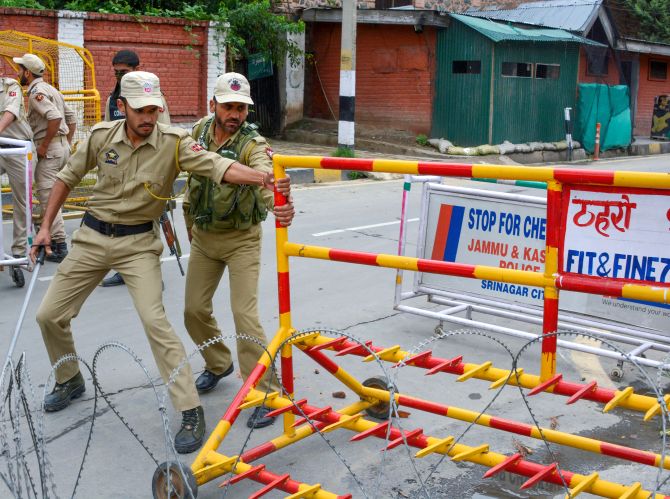 Security forces continued to man barricades on roads but allowed people to move after checking their credentials, they said.

Government spokesperson Rohit Kansal said primary schools across the Valley will reopen on Monday and government offices will also be fully functional from then. 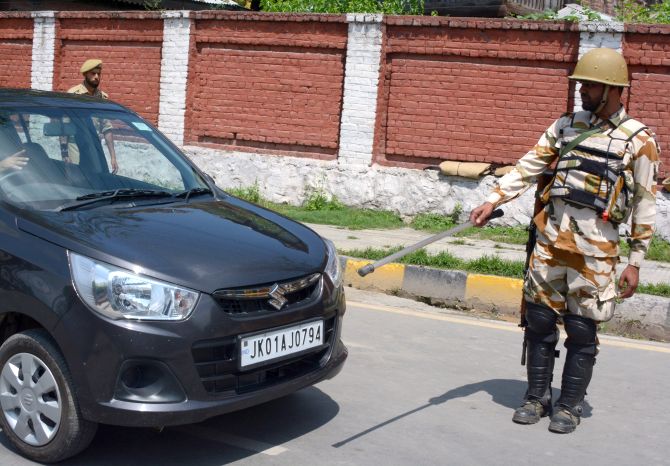 Some shops in the Civil Lines area opened on Saturday morning, the officials said, adding that there was increase in movement of private vehicles.

The officials said landline services were restored in some areas of Srinagar like Civil Lines, Cantonment, airport, Raj Bagh and Jawahar Nagar, but remained suspended in most parts, including the commercial hub of Lal Chowk and Press Enclave.

They said 20 more exchanges will be operationalised soon. 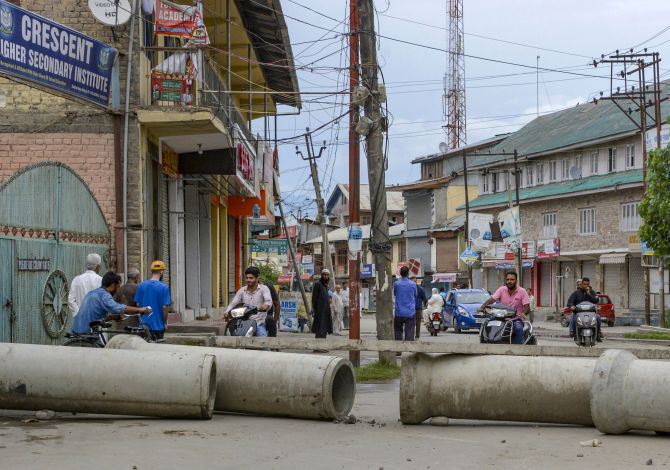 IMAGE: People block the main road at Natipora to protest against the abrogration of the provisions of Article 370. Photograph: PTI Photo

The restoration of exchanges had enabled landline services in Budgam, Sonamarg and Manigam areas of central Kashmir.

In north Kashmir, the services have been restored in Gurez, Tangmarg, Uri Keran Karnah and Tangdhar areas. 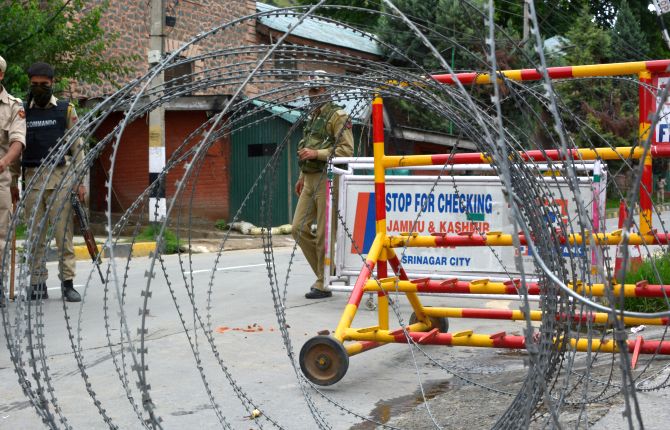 In south Kashmir, the landline services have been made operational in Qazigund and Pahalgam areas.

There was an increase in movement of private vehicles in the Civil Lines areas and other district headquarters of the Valley, the officials said, adding that some inter-district cabs were also seen plying in Dalgate area of the summer capital. 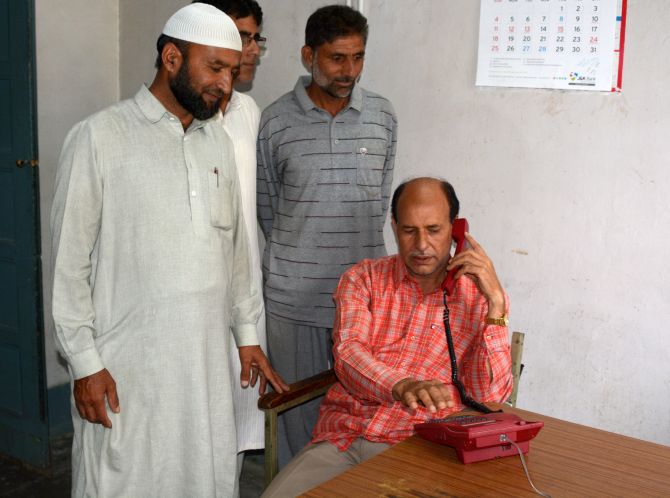 However, most of the business establishments, including fuel stations, remained shut.

Addressing a press conference, Kansal said the restrictions have been eased in 35 police station areas. 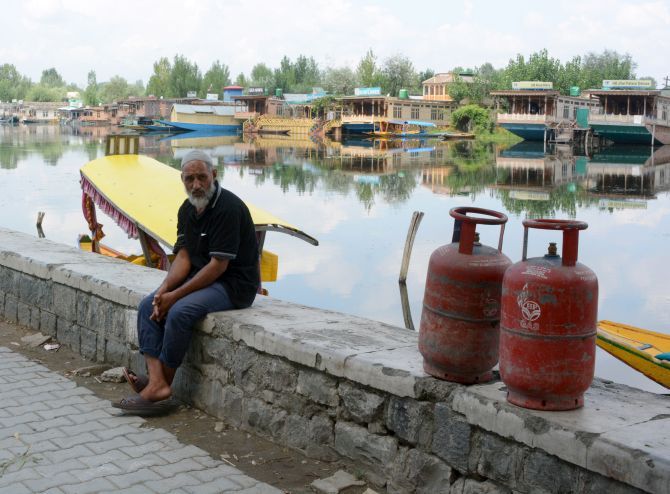 IMAGE: A man waits to refill gas cylinders during the relaxation in Srinagar. Photograph: Umar Ganie/Rediff.com

"The process of providing relaxation and easing of restrictions is already in progress. Relaxation has been provided in 35 police station areas across the length and breadth of the Valley and so far, there are no
reports of any untoward incident. The public transport is plying and we have encouraging reports of a lot of public movement," Kansal said.

"The endeavour is to make at least half of the exchanges in the Valley functional by today evening and by tomorrow evening, all of the exchanges, barring few in the vulnerable areas, would be made functional," he said. 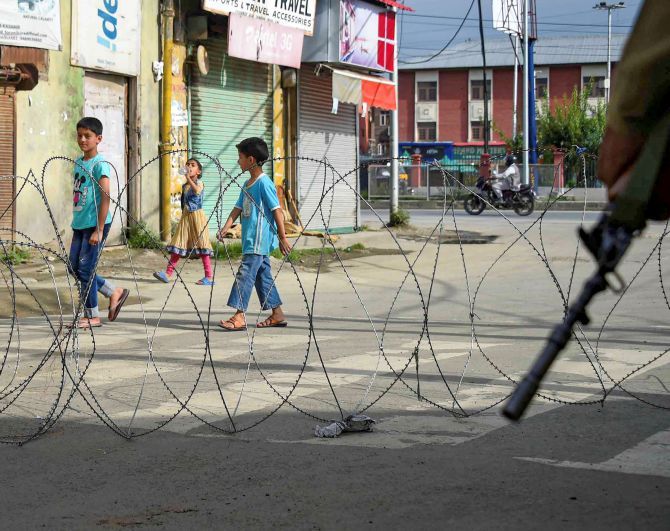 Kansal said in Jammu region, landlines and mobile phone services are functional and mobile internet services with some functionality in at least five districts have been restored. 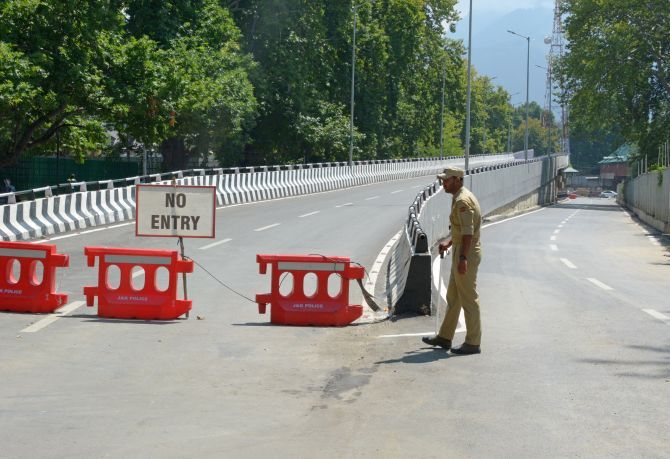 On a question of release of detained political leaders, Kansal said these decisions would be taken by local authorities based on the law and order situation in their respective areas.

Srinagar District Magistrate Shahid Choudhary said 190 schools will resume classes on Monday and extra classes are being planned to make up for loss of last 10 days. 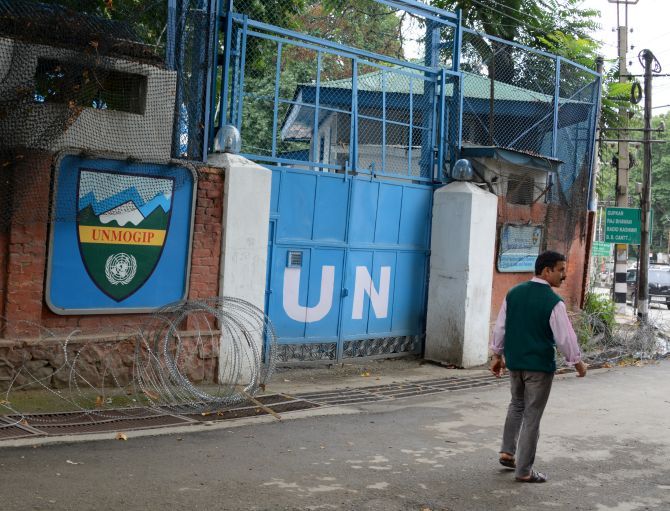 IMAGE: A man walks along the office of United Nations Military Observers Group in India and Pakistan in Srinagar. Photograph: Umar Ganie/Rediff.com

The J&K police said in the evening that the situation remained peaceful in the state.

"No untoward incident has been reported from anywhere so far. Traffic plied normally across the state including the Valley," they said.

Kashmir was placed under a total clampdown on August 5, hours before the Centre announced its move to abrogate provisions of Article 370 that gave special status to Jammu and Kashmir. 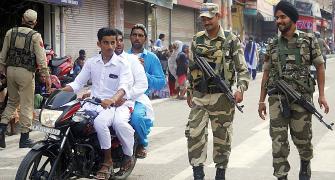