Rashtriya Janata Dal president Lalu Prasad on Monday slammed Anna Hazare's comment against MPs and said the use of such language could lead the nation towards anarchy.

"Anna Hazare's statement that 180 MPs are 'goondas' is highly objectionable. It is an insult to Parliament. He (Anna Hazare) should take back his words," Prasad told reporters outside Parliament.

He claimed that Anna Hazare had during his day-long protest at Jantar Mantar on Sunday said that 180 MPs who still had criminal cases against them were "goondas" in Parliament.

"By saying 180 goondas are sitting inside Parliament...this is the path to lead the nation towards anarchy," said the RJD chief.

When asked why he had not participated in the debate at the Jantar Mantar during the day-long fast by Hazare, Prasad said even though he was invited he preferred not to go as he was elected by the people of the country to participate in debates inside Parliament and not along the roadside.

"Anna had invited everyone. We have not been elected to speak on the footpath, but to participate in debates inside Parliament," said Prasad.

He said, "Parliament is the place for holding debates and not the roadside...I have nothing to do with those who went there and spoke."

Prasad said everyone wanted a strong and effective Lokpal, but there was a process to be followed. He also defended Rahul Gandhi, saying there was no reason for Hazare to criticise him. 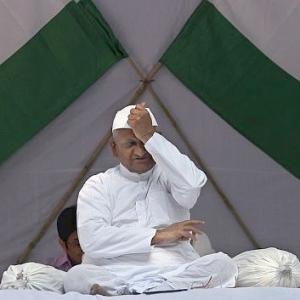 We are not afraid of Anna Hazare: Congress