Source: PTI
January 05, 2010 20:38 IST
The death toll due to the cold wave sweeping across north India rose to 157 even as its intensity abated slightly on Tuesday in parts of Punjab, Haryana and Chandigarh.

The 300-km Jammu-Srinagar national highway, the only road linking Kashmir valley with the rest of the country, reopened after being closed for two days due to heavy snowfall. Severe cold conditions claimed 37 more lives since Monday night with Uttar Pradesh alone accounting for 31 deaths.

Six other casualties were reported from Bihar. While five persons each died in Deoria and Maharajganj, four deaths each were reported from Siddharth Nagar and Bhadoi, two each from Pratapgarh, Kushinagar, Basti, Jaunpur and Ghazipur and one each from Lucknow, Sitapur and Muzaffarnagar, taking the toll to 141 in Uttar Pradesh, official sources said in Lucknow.

With let-up in snow and rains, the night temperature improved in Jammu and Kashmir barring Ladakh region, where the mercury dipped to minus 18 degrees Celsius in Leh and minus 16.8 deg C in Kargil district.

The minimum temperature in Srinagar today morning was 2 deg C, four degrees above normal. Pahalgam, a hill resort of south Kashmir, recorded a low of minus 2.9 deg C on Tuesday.

The national capital remained under the grip of an intense cold wave as chilly northwesterly winds from the Himalayas considerably brought down the maximum temperature, which was recorded at 14 deg C -- eight degrees below normal. It was the lowest of the season so far.

Minimum temperature climbed to 9.3 deg C after the sun came out, giving some comfort to Delhiites, who have been reeling under severe cold conditions for the past one week. 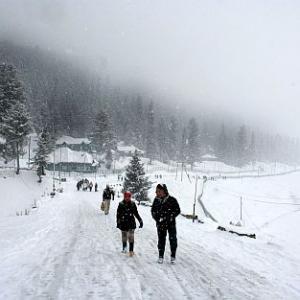 Snowfall in Kashmir brings back smiles