A last-minute change in his travel plan saved Congress Member of Legislative Assembly from Kerala A P Abdullakutty from meeting the fate of 158 passengers who died when an Air India Express plane from Dubai crashed near Mangalore airport on Saturday morning.

Abdullakutty initially planned to catch the ill-fated flight to Mangalore since he had to reach his home town Kannur urgently. But he was a bit late to reach the Dubai International Airport and changed his ticket to a flight to Kozhikode instead of the one to Mangalore, in which he had originally planned to fly. To his rude shock, he came to know about the Mangalore air tragedy as soon as he reached Karippur.

"My cousin was flooded with calls on his mobile from relatives and friends who were anxious to know if he was in the Mangalore flight or Kozhikode flight," said Abdul Khadar, a close relative of Abdullakutty.

"The whole family, including his wife and children, had tense moments before he (Abdullakutty) called us and said he was safe," said Khadar.

Abdullakutty was elected to the Lok Sabha twice on a Communist Party of India - Marxist ticket. But he joined the Congress just before the last Lok Sabha elections and then won a by-election from Kannur.

Mainkutty, one of eight passengers who survived the crash, is a fellow-townsman and distant relative of Abdullakutty.

"By God's grace, I survived. My prayers to Allah," he said. "If I had hesitated for a moment and failed to jump out of a gaping hole of the broken aircraft, I would have been a dead man myself," he said.

The Boeing 737-800 aircraft of Air India's low budget carrier Air India Express crashed and burst into flames after it overshot the runway while landing early on Saturday, killing 158 persons. Only eight passengers survived the crash. 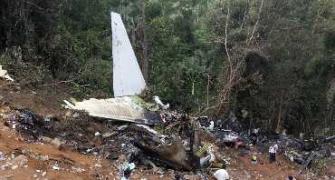 Images: The day after disaster struck
'The crew and the aircraft are overburdened'
Why Indian air space is a dangerous place

12 bodies yet to be identified: AI chief