The India meteorological department on Tuesday predicted isolated heavy rains in some parts of Kerala till Wednesday and widespread rains till August 11 as result of a newly formed depression near Odisha coast. The IMD issued a warning to coastal areas in Kerala and said there are chances of high tide, so the fishermen should not venture into the sea till Wednesday.

At the same time, major dams in the state, including the Cheruthoni dam of the Idukki reservoir, Mullaperiyar, Idamalayar, Banasura Sagar, Kakki, and Pamba, among others, have been seeing excess water flowing into the rivers resulting in a minor rise in water-level.

Ernakulam district authorities on Tuesday said 350 cumecs of the water from Idamalayar, which reached Periyar river but there was no considerable rise in the water-level.

Periyar river has been receiving excess water from Idamalayar and Cheruthoni dam but the water- level has not gone anywhere near the flood warning-level.

Even though there is no water rising in the river, the district authority has banned people from entering Periyar.

The water-level reading at all three stations -- Marthandavarma, Magalapuzha and Kalady in Periyar river show no rise in water-level despite the flow from Cheruthoni and Idamalayar.

Meanwhile, the water-level at the Mullaperiyar dam, which is managed by the Tamil Nadu government, is at 139.6 feet and 2,216 cusecs of water is being discharged currently.

Authorities have raised 13 shutters to 90 cm each. Four shutters of Kakki dam in Pathanamthitta district also have been raised by 90 cm with 146 cumecs of water flowing into it.

Idukki, Pathanamthitta, Alappuzha, Ernakulam, Kottayam and Thrissur collectors have declared holiday to the schools which are currently functioning as relief camps.

The State Disaster Management Authority said there are 213 active relief camps while most of them are in Alappuzha district (45), Thrissur 43 and Pathanamthitta 39. There are 9,275 people accommodated in the camps.

Since July 31, Kerala has been witnessing heavy rains, resulting in the death of 22 people. While seven were still missing and five got injured. SDMA said 58 houses were fully damaged while 412 suffered partial damage.

Earlier in the day, the water-level in Idukki reservoir continued to rise and the district administration increased the height of one opened-shutter from 120 cm to 160 cm.

Authorities said shutter number-3 would be raised to 160 cm while two and four would remain at 120 cm and shutter one and five at 40 cm. The water-level has reached 2,387.20 feet, which prompted the authorities to increase the shutter height.

The Idukki district administration has asked the people to remain vigilant.

Amid all this, the four spillway shutters of Malampuzha dam were raised by 80 cm on Tuesday.

As the inflow into the Banasura Sagar reservoir in Wayanad district has increased, the district administration has informed that apart from the already-opened shutters, one more would be opened by 10 cm.

"This might increase the water level in the Kabani river by 10 cm," the authorities said.

The Ernakulam district administration has urged people residing along the banks of Periyar river to remain vigilant after the Idamalayar dam was opened today to discharge 50 cumecs of excess water. 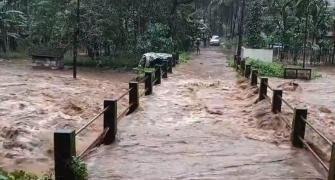 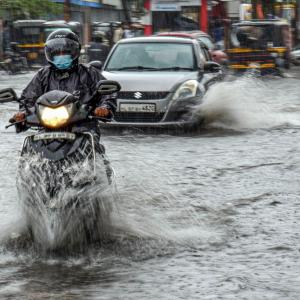