A red alert was declared in 8 districts of Kerala on Thursday by the India Meteorological Department (IMD) as rains continued to lash various parts of the state and disrupted the day-to-day lives of the people as roads got flooded or caved in and many got displaced from their homes to relief camps. 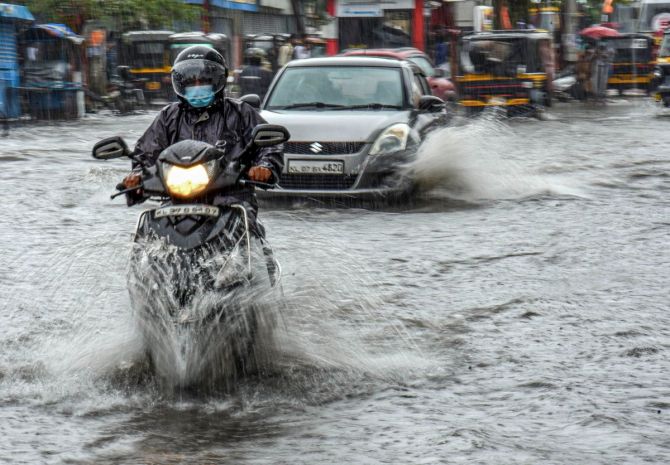 IMD issued a red alert for the day in the districts of Pathanamthitta, Alappuzha, Kottayam, Ernakulam, Idukki, Thrissur, Palakkad and Kannur and Orange alert in remaining districts except for Thiruvananthapuram where a Yellow alert is in place.

A yellow alert means heavy rainfall between 6 and 11 cm.

The inclement weather in the state resulted in water levels of various rivers -- like Pampa, Manimala and Achankovil -- in Pathanamthitta district rising close to or crossing danger levels.

The roof of an anganwadi building collapsed in Konni taluk of Pathanamthitta district, officials said and added that there were no casualties.

Meanwhile, six shutters of Malankara dam in Idukki were opened by 100 cm at 6 am, officials of the district said.

The water level in the Mullaperiyar dam was at 135.35 feet at 11 am, according to Idukki district officials.

Besides Pathanamthitta and Idukki, the districts of Kottayam, Thrissur and Kozhikode too witnessed heavy rainfall.

In Thrissur, the fourth shutter of Peringalkuthu dam was opened leading to rise in water level of Chalakkudi river to dangerous levels prompting the district officials to ask people living on its banks to evacuate immediately.

Even the shutters of Chimmini dam are expected to be raised further in view of the heavy rains in Thrissur district and as a result the water in Kurumali river there which is already above warning levels is expected to rise further, officials said.

In Kozhikode, the bad weather led to five flights from the Middle East which were bound to Calicut Airport being diverted to Cochin International Airport.

In Kottayam, the Meenachil river overflowed leading to flooding of some roads.

In some other parts of the state, TV channels showed visuals of roads that had cracked or caved as a result of the rains.

Holiday was declared for schools and educational institutions in various districts of the state a day ago in view of the rains, but in Ernakulam the announcement was made only after 8 am on Thursday, leading to many students turning up in schools and then having to be sent back home.

It led to widespread criticism of the Ernakulam District Collector on social media.

Meanwhile, the Central Meteorological Department has predicted widespread rains in Kerala from August 4 to 8.

Landslides and flash floods in Kerala triggered by heavy rains killed 18 people in the last few days, damaged hundreds of properties and displaced thousands to relief camps, the state government had said on Wednesday. 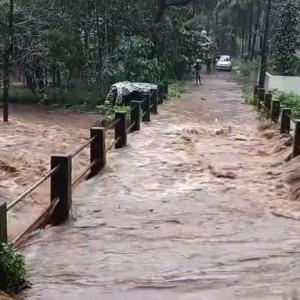